Bed bugs reportedly shut down a North Platte library. In connection with it, My Cleaning Products recommended a bed bug spray to help the public kill bed bugs in any place. 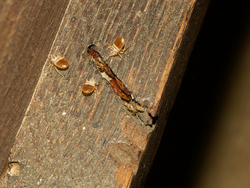 Unlike the conventional pest-control spray, MCP explained that Bed Bug Bully is made with organic-ingredients. It related that it is also in EPA's FIFRA 25(b) list.

Bed bugs were discovered in a library in North Platte in Nebraska. A report from nptelegraph.com related the details of it on its post dated May 24, 2014. Meanwhile, to help the public kill bed bugs anywhere fast and safe, My Cleaning Products recommended a bed bug spray.

The report shared that the infestation of the critters resulted to the shutting down of the facility on Thursday. And so the bed bug treatment could be implemented and the further spread of the pest could be prevented, it added that it will remain shut until Tuesday.

It was said in the post that the vampire-like bugs were found on Tuesday. They occupied two upholstered chairs near the front desk of the library, it relayed. As it detailed, they were particularly hiding in the cracks of the furniture.

Below is an exert from the post Bed Bugs Infest North Platte Library by My Cleaning Products.

“In North Platte in Nebraska, bed bugs found their way to one local library. As a result, the facility was shut down."

"The critters were discovered on Tuesday. They were found in the two upholstered chairs near the front desk of the library hiding, particularly, in the cracks of them.”

According to My Cleaning Products, because bed bugs reproduce and spread quickly, they are now very prevalent. Because of that, it stated that they could infest any place these days.

Given that, MCP asserted that one must be wary of bed bug signs. Moreover, it advised everybody to prepare a bed bug spray for an immediate bed bug treatment. That, it said, will help prevent a major infestation of them.

Nonetheless, the company only recommended the use of Bed Bug Bully. As it is both effective and safe, it stated that it is the right product for the bed bug elimination process.

Unlike the conventional pest-control spray, MCP explained that Bed Bug Bully is made with organic-ingredients. It related that it is also in EPA's FIFRA 25(b) list. And with those advantages, it assured that is safe.

Additionally, MCP stated that it does not only works on adult bed bugs. It said that it is so effective that it even kills the eggs and nymphs of those critters in seconds.

To try it, My Cleaning Products invite everyone to get a Bed Bug Bully Complimentary Sample at mycleaningproducts.com.