Bed Bugs Show Up in Albany Office of Mental Health, My Cleaning Products Recommends an Organic Spray to Kill Bed Bugs Without the Risks of Harsh Chemicals

Bed bugs reportedly sighted in a New York's Office of Mental Health. My Cleaning Products suggested a pesticide-exempt spray to kill bed bugs without endangering the health of anyone. 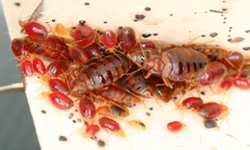 Made with natural ingredients, MCP said that Bed Bug Bully releases no foul smell or odor. It added that it also leaves no residues that could cause allergies, coughing or other health problems.

An Office of Mental Health in Albany in New York was recently scourged by bed bugs. News website timesunion.com relayed the details of it on its post dated June 04, 2014. Meanwhile, wanting to help the public kill bed bugs effectively without endangering anyone's health, My Cleaning Products suggested the use of the organic-based Bed Bug Bully.

According to the report, the critters particularly showed up in OMH's headquarters in Holland Avenue. And as it detailed, it left some people in the building with bites on their legs and ankles. It added that it also prompted employees to always turn their pockets inside out before going home to prevent the transfer of the pests to their houses.

The report relayed that OMH spokeswoman Kristin Salvi has confirmed the presence of the crawlies in the place. However, as it stated, she specified that the affected areas were confined spaces where OMH Design and some Office of Information Technology Services offices are located.

To resolve the issue, the post shared that a pest-control company was called-in to spray the building. It related that another round of spraying was also scheduled on the evening of June 3. Nonetheless, it said that workers were worried about the kind of pesticides used in the process.

"Bedbugs typically live in mattresses or in hidden spots within eight feet of where people sleep, according to the federal Centers for Disease Control."

"But they're also turning up in the Holland Avenue headquarters of the state Office for Mental Health."

Bed bugs are truly some of the most annoying pests one could ever come across with. However, My Cleaning Products said that a harsh chemical-based product is not necessary to get rid of them completely.

With Bed Bug Bully – an organic bed bug spray – one could eliminate bed bugs effectively, stated MCP. It said that it contains no harsh chemical ingredients that could compromise anyone's health.

Made with natural ingredients, MCP said that Bed Bug Bully releases no foul smell or odor. It added that the bed bug spray leaves no residues that could cause allergies, coughing or other health problems. As it noted, it is even on EPA's FIFRA 25(b) list for being pesticide-exempt.

Despite being organic, the company also stressed that the product is effective. It said that besides the adult bed bugs, it could kill their nymphs and eggs as well.

To prove those benefits, MCP invites everyone to try the Bed Bug Bully Complimentary Sample. It shared that it is available for everyone at mycleaningproducts.com.