Mold Soils Thousand of McKeldin Library Books, My Cleaning Products Suggests a Product to Effectively and Safely Kill Mold and Save Items from Its Spores

Thousands of books were damaged by mold in McKeldin Library, said a report. Stating that the fungus could also soil other items and surfaces, My Cleaning Products suggested products that could kill mold fast. 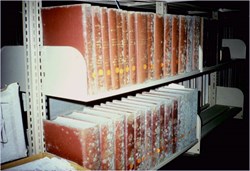 ...the absence of harsh chemicals in both Molderizer and Safe Shield allows them to offer a complete and safe mold removal process. Moreover, they were already proven effective by hospitals, hotels and mold exterminators...

A mold infestation hit the McKeldin Library of the University of Virginia. And according to a report from diamondbackonline.com published on September 02, 2013, it damaged thousands of books. Stating that the fungus could also spoil many other items, My Cleaning Products suggested the use of two organic-based mold removal products. It also offered samples of them to prove that they are the best help to kill mold safe and fast.

The report stated that the infestation was discovered in August 09, My Cleaning Products related. It particularly affected the fifth floor of the facility, it detailed.

As determined in the report, the unusual summer weather and inefficient heating, ventilation and air conditioning were the primary causes of the mold problem, MCP relayed. And out of the 200,000 books in the floor affected, it shared that about 10 to 20 percent of it was contaminated.

But contaminated or not, it was said in the post that the library will clean every book, MCP related. It said though that it will cost the facility about $100,000.

Here is an excerpt from the post Mold Damages Thousands of Books by My Cleaning Products.

“A library in the University of Maryland was struck by mold. And according to the report, the fungus left it with thousands of damaged books.

McKeldin Library was particularly that facility soiled by the spores. It was said that the unusual summer weather and the old heating, ventilation and air conditioning system of the affected area were the root causes of the problem.”

My Cleaning Products stated that apart from books, mold could damage any other organic item or surface. However, it said that the spores' negative health effects are what the people should be most careful with.

To avoid both – the health risks and the deterioration of organic items from mold – MCP asserted that early mold detection and elimination is needed. It said that quick response to mold presence would also prevent big mold remediation spending.

However, to kill mold safely and effectively, the company only advised the use of organic-based mold removal spray. As it stated, that's so the remediation process wouldn't compromise anyone's health. And being both organic-based, it asserted that both Molderizer and Safe Shield are the best to purchase.

MCP explained that the absence of harsh chemicals in both Molderizer and Safe Shield allows them to offer a complete and safe mold removal process. Moreover, they were already proven effective by hospitals, hotels and mold exterminators, it added. So, it stressed that anyone could rest assured that they work.

To prove those claims, MCP also encouraged the public to try the products themselves. It detailed that Molderizer and Safe Shield Complimentary Samples are available at MyCleaningProducts.com.