My Cleaning Products published a tip sheet of how to kill spiders effectively. In the piece, it also recommended a pesticide-exempt spider spray to make the process safe. 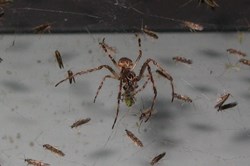 ...to ensure that the process is safe, it stated that it's best for everyone to get Spider Bully instead. It relayed that it is already in EPA's FIFRA 25(b) list as it is organic-based and is pesticide-exempt.

Spiders could make a home in a house. And wanting to help the public control their indoor presence, My Cleaning Products published a tip sheet. Also, it recommended a pesticide-exempt spray to kill spiders without the aid of harsh chemical ingredients.

MCP published the guide on its website on February 13, 2014. In it, it cited that although spiders are a common problem in almost all types of indoor environment, their presence is not difficult to prevent. Their elimination, it said, is also not too difficult to complete.

Particularly, to control the indoor spiders, the company enumerated three preventive steps in the post. Those steps were to cut the food source of the spiders, to keep vegetation away from the perimeter of the house or building and to clear the clutter.

“Spiders - you could see them behind your doors, at the corner of your room and up in your ceiling. Actually, in your home, they could be anywhere.

However, that doesn't mean you, or anyone else, could never keep them from intruding because you could. In fact, it is quite easy to block their presence. Or, if they're already inside your house, you could say that it isn't really difficult to get rid of them. That is, if you don't have a phobia on them.”

Meanwhile, if spiders are already inside, the company advised the use of a spider spray. It stated that with its help, the eight-legged pests could be eliminated promptly and easily.

Nevertheless, it pointed out that the spider treatment must be safe besides effective. Hence, just any of the spider repellents and sprays today won't work, it added. As it reasoned, that's because most of the conventional pesticides these days are made with harsh chemical ingredients that could compromise the people's health.

And so, to ensure that the process is safe, it stated that it's best for everyone to get Spider Bully instead. It relayed that it is already in EPA's FIFRA 25(b) list as it is organic-based and is pesticide-exempt. It also shared that apart from the adults of those pests, it could kill spider mites and eggs as well. And because of that, it stressed that there is nothing to be concerned about its effectiveness.

To prove all those benefits true, MCP invites everyone to try the Spider Bully Complimentary Sample. It related that it is available at mycleaningproducts.com.