“Jews, Muslims, and Christians: Let’s Talk About God” from Christian Faith Publishing author Kimberly Glomb is an enriching account that delves into the teachings of the three Abrahamic religions and how their faith is grounded in the same God. 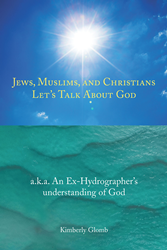 Glomb shares, “As Jews, Christians, and Muslims, we all worship the same God. Yes, our languages are different—Yahweh, God, and Allah—but our roots are in the same place. This book is my understanding of God, people, prophets, concepts, and beings shared by fellow believers (Jews, Christians, and Muslims). The biblical and Arabic names are used to show that it is the same person or prophet being referenced (e.g., John the Baptist [Yahya]). This book combines scriptures from the Torah, Bible, and Qur’an to explain these people and concepts as well as to show the source of the information being presented. There are forty topics covered. This includes history from creation up until God’s last prophet Muhammad (peace be upon him) as well as predictions of things to come as revealed by the writers of Isaiah, Daniel, and Micah to name a few with verses from the Qur’an. Related verses are grouped together as much as possible to keep the reader from having to skip around. This book was written to make the reader think and understand how much alike we are as believers and to be a reminder of God in these troubled modern times. It is time to forgive wrongs done to each other in the past, learn from each other, and make a peaceful future. This book attempts to resolve disagreements among us believers using the Bible and Qur’an. Some of the disagreements include the following: Is Jesus the Messiah? Why are angels considered female? Was God tired after the creation of the world? It concludes with some nonsectarian prayers.”

Published by Christian Faith Publishing, Kimberly Glomb’s new book reveals how Jews, Muslims, and Christians, though different in language, are brothers and sisters of the same grace, unified through the word, power, and will of the same God.

View the synopsis of “Jews, Muslims, and Christians: Let’s Talk About God” on YouTube.

Consumers can purchase “Jews, Muslims, and Christians: Let’s Talk About God” at traditional brick-and-mortar bookstores or online at Amazon.com, Apple iTunes store, or Barnes and Noble.

For additional information or inquiries about “Jews, Muslims, and Christians: Let’s Talk About God,” contact the Christian Faith Publishing media department at 866-554-0919.