Kim Jakum Designs, in association with The Artisan Group®, will have on display at GBK’s 2016 Golden Globes Celebrity Gift Lounge its “The Allure of Garnets" showpiece necklace along with select other designs, and will gift celebrities its Dandelion Wish Necklace. The Gift Lounge takes place January 8-9, 2016 at an exclusive location in Hollywood, California. 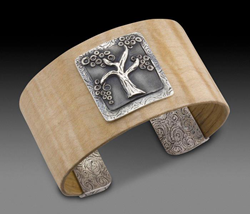 With my Dandelion Wish Necklace, I’m sending along my wish that the recipients’ hopes, wishes and dreams come true.

Kim Jakum Designs (http://www.kimjakumdesigns.etsy.com), in association with The Artisan Group®, will have on display at GBK’s 2016 Golden Globes Celebrity Gift Lounge a stunning showpiece called “The Allure of Garnets,” along with several other signature designs. The company will gift its Dandelion Wish Necklace to celebrities visiting The Artisan Group’s exhibit. The Gift Lounge takes place January 8-9, 2016 at an exclusive location in Hollywood, California.

Kim Jakum, designer/founder, Kim Jakum Designs, is known for her exquisitely handcrafted fine silver jewelry designs. Kim’s jewelry has been seen on some of television’s most popular shows, including “Sleepy Hollow,” "Cedar Cove," “The Vampire Diaries,” “Bones,” “Chicago Fire,” “Law & Order: SVU,” “Baby Daddy” and “The Young & The Restless.” These designs can be seen on the Celebrity Style page of Kim’s Etsy shop.

The Allure of Garnets showpiece is an over the top necklace designed to catch the eye. Alongside it will be displayed Kim’s award-winning Tiger Maple and Metal Cuff, her Men’s Shield Pendant and a Child’s Artwork Key Chain.

Kim says, “I’m from a small town in Wisconsin. Four years ago I never would have thought my jewelry designs would be worn on television or in the hands of celebrities. With the help of The Artisan Group, that dream has come true. With my Dandelion Wish Necklace, I’m sending along my wish that the recipients’ hopes, wishes and dreams come true as well.”

The Dandelion Wish Necklace will be presented in a royal blue and white snap closure box tied with a royal blue ribbon, tucked inside the Artisan Group’s classic black swag bag.

Kim has had her jewelry gifted at GBK’s Luxury Gift Lounge for the 2013 Primetime Emmys and the Official Talent Gift Lounge for the 46th Annual CMA Award. Parent’s Magazine, Metal Clay Today, Metal Clay Artist and Art Jewelry Magazine have recognized her work, as have numerous blogs, including coolmompicks.com and online marketplace uncommongoods.com.

Kim has been creating and designing unique, hand fabricated, artisan jewelry for over 20 years. She has studied with well-known jewelry artists including Tim McCreight, Terry Kovalcik, Celie Fago and Wanaree Tanner, and is certified in Artclay Silver and PMC. Kim offers one-on-one and small classes out of her home studio in Elkhart Lake, Wisconsin.

Kim is a member of The Artisan Group®, whose mission is spreading the word about handcrafted goods, and the Artist Impact Project, which is dedicated to teaching and spreading awareness for Metal Clay.

Journalists who would like to reach out to Kim can do so using the Email button at the right-hand side of this press release.

Kim has received numerous awards for her jewelry designs and has been featured in Metal Clay Artist Magazine, Art Jewelry Magazine and Lakefront Magazine and on coolmompicks.com and uncommongoods.com.

Kim is a proud member of The Artisan Group®.