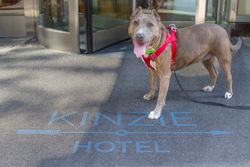 The Kinzie Hotel’s “Chicago Starts Here” motto is reflected in the reprisal of its Pamper Your Pooch package that officially relaunched today. The upscale, 215-room independent hotel that features a stylish Chicago-centric theme has been called the “most pet-friendly hotel” in the city because of its famed pet package. Pamper Your Pooch, which launched in 2016, includes lavish offerings exclusively for dogs such as doggie photography at local landmarks and a decadent Doggie Delights Dining Menu prepared by a local gourmet chef. New indulgences added to the package this year include a local doggie (non-alcoholic) beer line and custom-made doggie in-room furniture.

To kick-off the Pamper Your Pooch 2017 relaunch, Kinzie Hotel will be hosting a Yappy Hour on Friday, August 25th from 12:30 pm to 2:30 pm in honor of National Dog Day (the following day). During this time, the public is invited to stop by Kinzie’s lobby and front sidewalk area (20 W. Kinzie Street) with their four-legged friends to celebrate. The free event will feature complimentary beer and hot dogs (Lou’s Brews for pooches, hot dogs with all the fixings for owners). Welcoming attendees will be John Nelson-Alden, former Alinea cook-turned-gourmet dog food cook/brewer, serving pooches heaping tastes of his doggie cuisine and his hand-crafted doggie beer in light of its exclusive launch at Kinzie (note: Kinzie Hotel is the first hotel to offer dog beer). Yappy Hour will also include lots of doggie giveaways (like bandanas) as well as information on doggie adoptions.

“At Kinzie Hotel, we believe in pampering all our guests,” said General Manager Andrew Eck. “We’ve upped the ante this year to ensure you and your pooch’s stay is truly second to none.”

Dogs are invited to stay and play at Kinzie Hotel all year-round. Upon arrival, pooches are greeted with customized welcome gift bags that includes gourmet treats, an “I Explored Chicago” bandana, chew toys, doggie spa amenities, and complimentary copies of FIDO Friendly magazine and Kinzie’s own “Pet Lover’s Guide to the City.” After entering their deluxe hotel room, dogs will be just as pleased as their owners to find home-away-from-home creature comforts above and beyond the standard doggie water and food bowls, such as customized hotel room dog houses with pillow-top plush beds.

Beyond the pet-friendly amenities inside, more doggie magic happens outside, as Pamper Your Pooch also includes a complimentary photo shoot of dogs and owners personally taken by the Kinzie Pet Concierge at a nearby Chicago landmark, such as the Wrigley Building, Chicago Theatre or Michigan Avenue bridge. The Pet Concierge will guide guests to their location of choice within walking distance, and capture a high-resolution shot that can be framed to take home or shared on social media. In addition, Kinzie Hotel’s Pet Concierge can set up add-ons with local pet-friendly establishments/services, such as:

To cap it all off, Kinzie Hotel partners with local non-profit rescues shelters, like ALIVE Rescue and PAWS, for its “Dog of the Month” social media program, in which Kinzie’s Facebook fans can help find homeless Chicago pooches a home. Partial proceeds from each Pamper Your Pooch packages are also donated to local rescues in the form of a monetary donation.

To book the Pamper Your Pooch package, visit http://www.kinziehotel.com/specials, or call 312.395.9000. The package is $60 on top of the nightly room rental charge however Kinzie Hotel will waive the standard pet fee. Pamper Your Pooch is available for all guests traveling with dogs, and is based on availability.

Kinzie Hotel is a Chicago-centric boutique hotel in the vibrant River North district. Along with a contemporary, upscale atmosphere, the 215-room hotel offers daily continental breakfast served on each guest floor as well as a nightly manager’s reception with light appetizers for each guest. Located at 20 N. Kinzie St (Chicago, IL 60654), the property opened in 2014 and is managed by Portfolio Hotels & Resorts. For more information or to book a next reservation, visit http://www.kinziehotel.com.