Kirby Calhoun’s Newly Released “Single Set of Bootprints: A story of a God-made Green Beret” Shows the Powerful Hands of God as He Moves in One Man’s Life Journey

“Single Set of Bootprints: A story of a God-made Green Beret” from Christian Faith Publishing author Kirby Calhoun unveils a profound true story of Kirby’s trials and tribulations over the years woven within a tale of how God continues to work through his life. 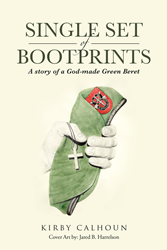 Calhoun shares, “Kirby was raised in a God fearing home but never really knew God. Throughout his life and military career, Kirby experienced many difficult obstacles and trials. For nearly 30 years, Kirby believed himself to be both extremely lucky and extremely unlucky, without giving much thought to God.

“This story is about Kirby’s life and details some of the uphill struggles he faced throughout childhood and adulthood. In a post 9/11 America, in an attempt to change the path he was on, Kirby joined the United States Army to serve his country and to fight terrorism.

“Upon completion of his last contract, Kirby left active duty Army after serving for 10 years. Shortly after leaving the service, Kirby experienced something that would change the course of his future and would make him question everything he thought he knew.

“One life altering night prompted Kirby to search for God, while struggling to understand where God had been throughout his life when he was walking through every low point that he experienced. Jesus helped Kirby to look back on his life with a new set of eyes. This book may tell of Kirby’s story but it isn’t about him. This book highlights the consistent thread of God’s work in Kirby’s life.”

Published by Christian Faith Publishing, Kirby Calhoun’s new book is a stirring read that accounts the life of the author in the hopes of letting everyone see the truth that is Jesus Christ. He hopes that his own story reaches people and inspire them into moving closer to the Father.

View a synopsis of “Single Set of Bootprints: A story of a God-made Green Beret” on YouTube.

Consumers can purchase “Single Set of Bootprints: A story of a God-made Green Beret” at traditional brick & mortar bookstores, or online at Amazon.com, Apple iTunes store, or Barnes and Noble.

For additional information or inquiries about “Single Set of Bootprints: A story of a God-made Green Beret,” contact the Christian Faith Publishing media department at 866-554-0919.