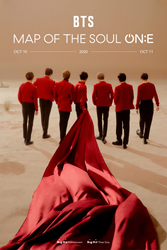 Following the explosive success of their No.1 single “Dynamite,” global superstars BTS are again pairing up with Kiswe and Big Hit Entertainment to serenade virtual audiences with their new two day online concert, “BTS MAP OF THE SOUL ON:E”.

This marks the latest collaborative effort between Big Hit, BTS and Kiswe since “BANG BANG CON The Live” earned the Guinness World Record for most viewers for a music concert live stream.

Broadcast from Seoul using Kiswe’s "multi-view" live streaming technology, “BTS MAP OF THE SOUL ON:E” will reach fans around the world on October 10 and 11.

BTS will work with Kiswe to create an interactive concert experience for audiences around the globe, leveraging visual features such as 4K resolution, AR and XR. Fans will be able to customize their own viewing experience, choosing which camera shot they want to see, as well as interact with each other by forming private watch party rooms.

“BTS continues to push the envelope for what’s possible for virtual concerts in the era of COVID-19 and beyond,” said Kiswe CEO Mike Schabel. “We’re excited to help loyal fans around the globe experience their music in new and ever-more immersive ways.”

Big Hit Entertainment added, "We have prepared never-before-seen stages and various setlists for fans who must have felt disappointed by the cancellation of offline concerts due to COVID-19. Some songs will also be given variations across the two days. We hope you look forward to “BTS MAP OF THE SOUL ON:E”.”

Their new album “BE (Deluxe Edition)” slated for November 20 is now available for pre-order.

More information about the concert can be found on Weverse Shop.

About BTS
BTS, an acronym of Bangtan Sonyeondan or “Beyond the Scene,” is a South Korean boyband that has been capturing the hearts of millions of fans globally since their debut in June 2013. The members of BTS are RM, Jin, SUGA, j-hope, Jimin, V, and Jung Kook. Gaining recognition for their authentic and self-produced music, top-notch performances, and the way they interact with their fans, the band has established themselves as global superstars breaking countless world records. While imparting a positive influence through activities such as the LOVE MYSELF campaign and the UN ‘Speak Yourself’ speech, BTS has mobilized millions of fans across the world (named ARMY), topped prominent music charts, performed multiple sold-out stadium shows across the world and has been named as one of TIME 100: The Most Influential People of 2019. The band has also been recognized with numerous prestigious awards like the Billboard Music Awards, American Music Awards and MTV Video Music Awards.

About Kiswe
Kiswe is a cloud-based video company that creates real-time live streams to engage digital audiences and unique communities around the world. By partnering with sports rights holders, Kiswe Studio enables remote commentators to transform live games into multiple viewing experiences via personalized content and local languages. Kiswe's technology also unlocks ways for people to stay connected over live events through a content creation and mobile platform that bridges media companies with consumers. Kiswe is headquartered in New Jersey, USA and has offices in New York, Seoul, London, Hasselt and Singapore. Learn more at http://www.kiswe.com.