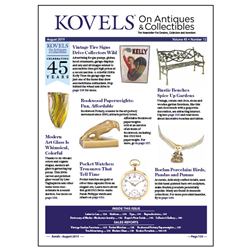 Vintage garden furniture auctioned in Philadelphia is featured in a sale report in Kovels On Antiques & Collectibles August 2019 newsletter. Kovels’ focuses on rustic stone and cast-iron benches with naturalistic elements like leaves, grapevines and tree trunks. Be sure to see the pair of cast iron benches with oak leaves and pinecones that brought more than $18,000.

Bidders took time to admire antique pocket watches at a New Hampshire auction. Kovels’ latest newsletter pictures American-, British- and Swiss-made timepieces with open faces or hunting cases that spoke of an elegant era of accessories. The most expensive, a working 14-karat gold c.1885 Waltham model, sold for $20,000, while a Swiss Civil War-era watch with a battlefield image on its face brought $400. Other examples were priced in between.

Rookwood pottery has been popular for over 100 years and their large, important pieces sell for thousands of dollars. But they also made small and useful pieces that are sometimes overlooked, like the paperweights pictured in the August newsletter. See paperweights depicting a monkey, squirrel, duck, bear, frog and others that sold for hundreds of dollars, as well as the Rookwood “crossover” advertising paperweight picturing the company name that brought $3,000. More advertising collectibles can be viewed in Kovels’ August issue, and they have tires as their subject. Vintage signs with famous names and trademarks were auctioned in Indiana, and it doesn’t take an automobiliana collector to recognize the companies and clever logos of Firestone, Michelin, Goodyear, Pirelli, Dunlop and others.

Modern glass vessels by contemporary glass artists auctioned for high prices in New Jersey. Find brilliantly colored glass in unpredictable shapes by Lino Tagliapietra, Dale Chihuly and William Morris along with their prices in Kovels’ newsletter. And, finally, a selection of perennially popular porcelain figurines by Boehm is also part of the August issue. Sold at auction in Atlanta, the delicate detailed and hand-painted pieces depict plants, birds and animals.

Kovels’ popular illustrated Collector’s Gallery answers readers’ questions about a porcelain hatpin holder, a set of Old Maid cards, a Royal Bayreuth pitcher and a marked silver-plated bowl. The August Dictionary of Marks lists makers of modernist-style jewelry. And more than 70 antiques and collectibles are listed in the August Buyer’s Price Guide.