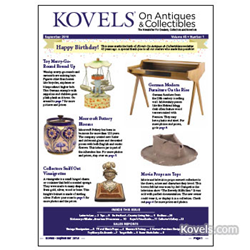 Toy merry-go-rounds and carousels auctioned in New Jersey are featured in a sale report in Kovels On Antiques & Collectibles September 2018 newsletter. Most were tin and made in Germany; all were whimsical and enticing. Kovels pictures merry-go-rounds with clowns, boats and zeppelins as well as horses that sold under $500. Antique vinaigrettes, small containers meant to hold a scented sponge, were auctioned in Pennsylvania. Prices ranged from under $300 to over $9,000 for 19th-century vinaigrettes made of gold, silver, wood or bone. Figural examples such as a knight’s helmet, monkey’s head, lady bug, leaning tower and more are pictured in Kovels’ September newsletter.

A collection of Moorcroft pottery was auctioned in Connecticut. Moorcroft has been making pottery in England for more than 120 years. Kovels’ September issue includes pictures and prices of vases, bowls, jars and urns decorated with flowers and the company’s signature glazes that sold from $150 to $5,500. Props from movies and television shows connect collectors to the actors, characters and shows that they loved. Kovels’ September issue includes pictures and prices of a hat from “The Beverly Hillbillies,” a blaster from “Star Wars, The Return of the Jedi,” a helmet from “Ben Hur,” and other objects from memorable productions.

Kovels also reports on two unusual collections, one of colorful glass target balls that were once filled with feathers and another of razor blade “banks” that were once used to dispose of used razor blades. They go “on the road” to Columbus, Ohio, to report on the Country Living Fair. Kovels’ popular illustrated Collector’s Gallery answers readers’ questions about a Coca-Cola pocket mirror, a silver-plated butter dish, a Roseville vase and a mystery tool. September’s Dictionary of Marks dates marks found on Steuben glass. And more than 70 antiques and collectibles are listed in September’s Buyer’s Price Guide.