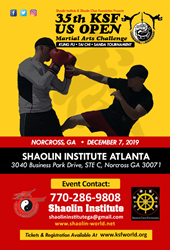 To rebuild the Gong Fu Sanda community in the US, the 35th US Open Gong Fu Fighting Challenge with the theme event of “Sanda Revival”. This tournament is to give experienced fighters a platform to shine and to grow. It also gives beginners and novice fighters a ground to learn and experience.

KSF (Kung Fu Sanda Federation) a division of SWF (World Shaolin Federation, aka Shaolin Chan Foundation)) will organize and sanction the event along with Shaolin Institute as the host of the event, providing a platform for Gong Fu (Kung Fu) Sanda artists and ameteur fighters to grow and to experience the reality of self-defense.

All registration, check-in and judges meetings as well as weigh in will be on Friday December 6th from the afternoon until the night.

This tournament is not only to provide experienced fighters a platform to shine and to grow but also give beginners and novice fighters a ground to learn and experience.  It will be a great place for all Kung Fu and other styles of martial artists to have a great friendship connection.

The Saturday day event will not only feature combat fighting, but ShuaiNa, and creative & choreographed fighting, continuous light sparring, as well as Stunts performances apart from traditional Kung Fu.

The first US Open was held at the Convention Center in Mobile, Alabama on 6 May, 1994. Since its inception, Grandmaster DeRu (Shawn X. Liu), has held over thirty US Open Kung Fu Sanshou/Sanda fighting events here in the US. Included are eight professional “Art of War” Sanshou/Sanda tournaments, sponsored by the Shaolin Institute and sanctioned by KSF (Kung Fu SanDa Federation a division of Shaolin World Federation).

“It has been over 25 years since I hosted the first official US Open International Martial Arts Championship in the US, focusing on Kung Fu Sanshou Sports Fighting,” said Grandmaster DeRu. “As a result, great fighters, such as David Sanders, Patrick Barry, K.J. Noon and Cung Le, are among the ranks to have their fighting roots as champions at the US Open Martial Arts Fighting Challenge and US Open International Martial Arts Championships, held in Mobile, Alabama.”

All of those fighters have trained extensively on the Shaolin Institute campus of Mobile, New Orleans and Atlanta before launching their professional fighting careers on to UFC, an MMA pro fighting championship.

All of these fighters have their fighting skills honed with the master, and their Sanda/Sanshou competitive edges are matured at the US Open Martial Arts Championships.

The 35th US Open Gong Fu Challenge kicks off on December 7th morning 9:00 Am. The event committee expressed that they were expecting to have many martial arts schools and enthusiasts from US, especially southeast region to participate as competitors or just as spectators.

Here are the basic schedules: