Kurt Carlson's new book “Pacific Paradise" is two coming-of-age stories, one of a small island-nation, and the second of the daughter of the nation’s president

Recent release “Pacific Paradise" from Page Publishing author Kurt Carlson explores how while citizens of Sumonajob battle between isolationism and an open country welcoming tourism, Mimi must decide which side to choose as her relationship with American businessman Jason Richards grows from hatred and misunderstanding to friendship and alliance. 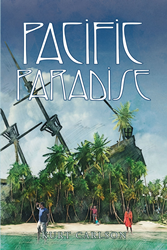 Kurt Carlson, who retired from the Air Force, has completed his new book “Pacific Paradise": an emotional journey, where subplots of the story include the European colonization of the island, the separation of political factions on the future of Sumonajob, and the various characters who show up throughout the story.

Carlson writes, "Jeanie and Luana came across two caverns situated side by side from the mainstream. Luana felt they could save time if they split up, each taking a cavern and seeing what they contained. Luana left to enter one cavern. Jeanie went into the other, leaving her rifle, instead bringing the camcorder she had brought along. Jeanie wanted to take some film for her television station. Upon entering the cavern, Jeanie was taken aback by the grisly sight before her. Human remains were strewn about everywhere. Some were hanging by ropes from the cavern ceiling. Others were piled on the floor, and still more were spread out on coral tables. As she panned the horrible scene with her camera, Jeanie was startled by a voice coming from behind her."

Published by Page Publishing, Kurt Carlson's intriguing work details how difficult it is for a country to retain its identity, while embracing tourism as a basis to its economy.

Whether it’s the weeklong crab races, the deadly trip down to Shanty Town, the abduction of Richards’s secretary on their second day on the island, or the comings and goings of Luana and Jeanie, the story twists unexpectedly at every point.

Readers who wish to experience this intriguing work can purchase “Pacific Paradise" at bookstores everywhere, or online at the Apple iTunes Store, Amazon, Google Play, or Barnes and Noble.