Kurt Hamilton’s newly released “Christ Is Not Religion” is a thought-provoking discussion of mankind’s influence on the idea of religion.

“Christ Is Not Religion” from Christian Faith Publishing author Kurt Hamilton is a compelling argument for God’s acceptance of all and the alienation attributed to God through man’s development of religion. 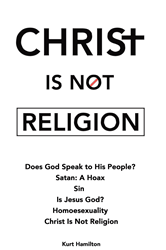 Hamilton shares, “According to scripture, being religious means very little. The Bible says that demons are religious and believe in God, and surely demons are not going to Heaven (James 2:19; 2 Cor. 11:13-15)!

“This book is inspired by a true correspondence between two men: Kurt (the author) and Matt. The ‘Matt Letters’ are actual letters emailed between the two men; nothing has been edited except Matt’s expletives. Kurt is employed by a Christian company, which has placed the Christian ‘fish sign’ (ixthus) on its packages of merchandise. Matt is a non-Christian who has purchased this product at a local do-it-yourself center and is extremely upset that the Christian sign is being displayed in a public place. In Matt’s correspondence, he communicates to Kurt that he is bisexual. Matt believes that the religious community has rejected him, and therefore, Matt vehemently rejects Christ and Christianity.

“There are many mainstream religions today steeped in religious bondage that poorly represent the true, compassionate God. They believe themselves to be the ‘Way to God’, yet religion is not the way to God at all. Religion does not free a person from that which can destroy the physical, emotional, and spiritual aspects of life. Religion can change a man’s mind, but it cannot change a man’s heart. Simply said, religion is not perfect because man is not perfect (Heb. 7:19; Colo. 2:23; Gal. 3:1-3; Rom. 8:3). The scriptures say, ‘Our gospel did not come in word only, but in power’. Christ has come to turn men ‘from darkness to light, and from the power of Satan to God’ (Acts 26:18; 1 Thess. 1:5; 1 Cor. 2:4-5).

Published by Christian Faith Publishing, Kurt Hamilton’s new book will challenge and encourage readers as they consider the powerful message within.

Hamilton draws from personal experience and study to present readers with an impactful message of faith and the teachings of Christ.

Consumers can purchase “Christ Is Not Religion” at traditional brick & mortar bookstores, or online at Amazon.com, Apple iTunes store, or Barnes and Noble.

For additional information or inquiries about “Christ Is Not Religion,” contact the Christian Faith Publishing media department at 866-554-0919.