‘Kwajalein Atoll: The Legacy of Faith and Hope’ gets new marketing campaign 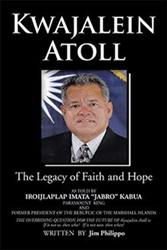 Throughout all of Jim Philippo’s interactions and travels with Iroijlaplap Imata Jabro Kabua, he has seen this man as one who affects the outcome of destiny through his interaction with many of his people or with just about anyone. Philippo considers Kabua as the “kindly king,” who goes out of his way to those who are in need of his services. Kabua has been known to say, “I am only good as a servant to my people.”

In “Kwajalein Atoll: The Legacy of Faith and Hope,” (published by Xlibris in December of 2016) Philippo tells the epic tale of the Kwajalein Atoll situated in the mid-Pacific Ocean. This is the untold historical saga of the mass evacuation of native citizens to a stricken barren island in the late 1950s. It is narrated and told by Iroijlaplap Imata Kabua and his sources regarding the U.S. military Use and Operating Rights Agreements (MUORA) between the U.S. government and Republic of the Marshall Islands government (RMI) and the Land Use Agreement (LUA) between the RMI and Kwajalein landowners.

According to Philippo, this story also relates just how the citizens of these islands were forced to evacuate from their homeland to inhospitable locations so the U.S. military could strategically use this atoll as an ideal missile target zone. “It is a tale of the native people, who were evacuated in the interest of a US Military build-up without any due regard and concern for any future consequences that would befall these native citizens,” Philippo added.

“Kwajalein Atoll: The Legacy of Faith and Hope” includes interviews with Iroijlaplap Imata Jabro Kabua himself, many of his close colleagues and subjects who took part in the protests and demonstrations that were held when he began his journey leading and standing at the edge of adventure as an advocate in politics, taking the helm of the nation as the second president of the Republic and as the Paramount Iroijlaplap (King) of the largest land parcels on Kwajalein Atoll and the Atolls of the Kabin Meto, and certain Ralik Chain Islands in the Marshall Island archipelago.

Xlibris Publishing, an Author Solutions, LLC imprint, is a self-publishing services provider created in 1997 by authors, for authors. By focusing on the needs of creative writers and artists and adopting the latest print-on-demand publishing technology and strategies, we provide expert publishing services with direct and personal access to quality publication in hardcover, trade paperback, custom leather-bound and full-color formats. To date, Xlibris has helped to publish more than 60,000 titles. For more information, visit xlibris.com or call 1-888-795-4274 to receive a free publishing guide. Follow us @XlibrisPub on Twitter for the latest news.
###