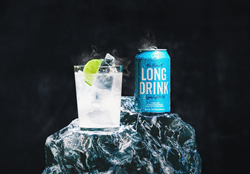 The Long Drink, a top selling category of alcohol in Finland, a legend that is now available in America, is pleased to announce that universally recognized music producer Kygo and renowned PGA tour professional golfer Rickie Fowler have joined the company as co-owners. The addition of Kygo and Rickie comes at a momentous time for the brand as it is set to launch across California, Florida and Arizona next month, allowing more consumers to enjoy the unique and refreshing taste. Kygo and Rickie’s introduction to The Long Drink stems from years of friendship.

The Long Drink co-owner and actor Miles Teller asked his longtime friend Kygo to DJ his wedding in Hawaii in 2019 and it was then that Kygo tried The Long Drink for the first time. Kygo became a fan of the distinctive taste and immediately shared The Long Drink with friends and family. He gifted a couple cases to Rickie, who then became intrigued and asked about getting involved with the company on some level. After Kygo and Rickie discussed possibilities with The Long Drink team, a deal was struck to have the duo make a minority investment in The Long Drink.

As owners, both Kygo and Rickie will be actively involved, together with Teller, in the marketing of The Long Drink brand. Palm Tree Crew, a diversified holding company that operates and invests in companies at the intersection of consumer, entertainment and technology, of which Kygo is a co-founder, alongside Myles Shear and Austin Criden, will also support The Long Drink’s marketing efforts. Palm Tree Crew will activate and leverage their unmatched network on behalf of The Long Drink.

“I first heard of Long Drink when I was DJing my good friend Miles Teller's wedding in Hawaii last year. We all had them and I loved the taste. The company's vibe really matched our brand and what we've been building so we couldn't be more excited to be involved,” says Kygo, Co-Founder of Palm Tree Crew. “As an entrepreneur and manager, I've realized that the product is always most important and The Long Drink is a great one. The first time I tried it, I loved the taste and instantly started coming up with ideas as well as ways to get involved with the company. Kyrre (Kygo) loved the taste too so the next day we started calling up some of our friends to get them behind the brand as well,” adds Myles Shear, Co-Founder of Palm Tree Crew.

Since making its debut in 2018, The Long Drink has expanded to Massachusetts, Connecticut, Georgia, Nevada, New York, New Jersey, Ohio, Texas and soon launching across California, Florida and Arizona.

“I'm really excited to join The Long Drink team as an investor. When Kyrre (Kygo) and Myles Shear sent me a couple cases to try, I knew I wanted to get involved. Long Drink really stood out to me from the rest of the canned cocktails and seltzers that I have tried. It tastes amazing and is perfect after a day on the course,” says Rickie Fowler.

The category of ‘long drinks’ was brought to America for the first time in early 2018 by the next generation of Finns, co-founders Ere Partanen, Sakari Manninen and Mikael Taipale, alongside American entrepreneur, Evan Burns, who wanted the world to experience the refreshing and unique Finnish Long Drink. Teller joined the company as a co-owner in the summer of 2019. Over the last 12 months the brand has experienced exponential growth with sales increasing by 750%.

“I’m thrilled to be partnering with Kygo and Rickie. Both these guys are at the top of their game and they are a perfect fit for Long Drink. I look forward to collaborating with them and being on the front lines as we continue to expand the awareness and growth of Long Drink across the country,” says Miles Teller, actor and co-owner of The Long Drink. “Nothing compares to Long Drink and when people try it, they want to know where to buy it. Having these guys on board is a tremendous asset. I’ve known Kygo for a couple years and introduced him to Long Drink when he came to Hawaii to perform at my wedding. He loved it and wanted to get in on it, so here we are. We’ve got some cool marketing stuff in the works, so stay tuned. The Legend continues Kippis!,” adds Teller.

The roots of long drinks go back to the 1952 Summer Games in Helsinki, when the country of only 4 million people was still recovering from World War II. Concerned how to serve drinks quickly enough to all the visitors, the government commissioned the creation of a revolutionary new liquor drink that was both delicious and fast to serve - and so the first long drinks were born.

The Long Drink combines the origins of the past with the modern-day processing and technology of the future. The result is an award-winning, refreshing, citrus soda with a premium liquor kick. Canned at 5.5% Alc./Vol. Last year, The Long Drink introduced Long Drink Zero, a low-calorie option, and earlier this year debuted additional variants including Long Drink Strong, a higher ABV option, and Long Drink Cranberry.

About The Long Drink

"Long drink" is a top selling category of alcohol in Finland - a legend that is now available in America. The roots of long drinks go back to the 1952 Summer Games in Helsinki, when the country of only 4 million people was still recovering from World War II. Concerned how to serve drinks quickly enough to all the visitors, the government commissioned the creation of a revolutionary new liquor drink that was both delicious and fast to serve - and so the first long drinks were born. Now this legend has finally been brought to America by the next generation of Finns who want the world to experience the refreshing and unique Finnish Long Drink. The Long Drink garnered a Gold Medal (94 Rating) at the prestigious 2019 New York International Spirits Competition (NYISC). The Long Drink is currently available in Massachusetts, Connecticut, Georgia, Nevada, New York, New Jersey, Ohio, Texas and soon launching across California, Florida and Arizona.