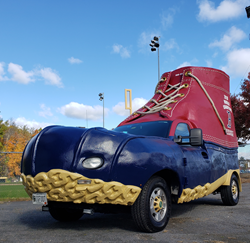 “We’re proud to help celebrate the Red Sox win, plus, nothing looks better in a duck boat than a duck boot.”

Internationally recognized outdoor retailer L.L.Bean, best known for its iconic L.L.Bean Boots and other high-quality gear and apparel that help to further people’s enjoyment of the outdoors, is celebrating the Red Sox victory with custom L.L.Bean Boots for the 2018 World Championship team.

Handcrafted in Maine like all L.L.Bean Boots, these unique boots are made in Red Sox team colors with red leather and blue rubber. Each boot is embroidered with a custom design, including the team’s historic regular season record: 108-54. The boots were handcrafted by L.L.Bean’s skilled bootmakers as a special gift for the Red Sox players and staff and will not be for sale to the public. L.L.Bean has been a proud partner of the Boston Red Sox since 2011.

“At L.L.Bean we’ve been cheering the Red Sox for generations, and we’re always thrilled when the Red Sox extend New England’s baseball season into Bean Boot season,” said Shawn Gorman, executive chairman of L.L.Bean. “We’re proud to help celebrate the Red Sox win, plus, nothing looks better in a duck boat than a duck boot.”

Fans can get a glimpse of these boots when they see the L.L.Bean Bootmobile in the Red Sox Victory Parade in Boston on Wednesday. The 12-foot tall rolling replica of the Bean Boot will be styled to match the boots made exclusively for the team.

As part of the celebration, L.L.Bean is offering customers at its One Seaport store in Boston a 20% discount off their purchase if they are wearing red on Wednesday. L.L.Bean opened its One Seaport location earlier this year as its first full retail store in downtown Boston. The Bootmobile will also be parked at One Seaport following the parade.

ABOUT L.L.BEAN
L.L.Bean, Inc. is a leading multichannel merchant of quality outdoor gear and apparel. Founded in 1912 by Leon Leonwood Bean, the company began as a one-room operation selling a single product, the Maine Hunting Shoe. L.L.Bean is a family-owned Maine company led by Executive Chairman Shawn Gorman, the great-grandson of Leon Leonwood Bean, and Stephen Smith, President and CEO. While its business has grown over the years, L.L.Bean continues to uphold the values of its founder, including his dedication to quality, customer service and a love of the outdoors. In the past five years, L.L.Bean has donated over $6 million toward conservation and land stewardship. L.L.Bean currently operates 42 stores in 17 states across the United States, along with 28 stores in Japan. The 220,000-sq. ft. L.L.Bean retail store campus in Freeport, ME, is open 24 hours a day, 365 days a year and welcomes more than 3 million visitors every year. L.L.Bean can be found worldwide at http://www.llbean.com, Facebook, Twitter, YouTube, Pinterest, and Instagram.