Outdoor brand celebrates the final section of its summer-long hike from Georgia to Maine to mark the 50th anniversary of the National Trail System. 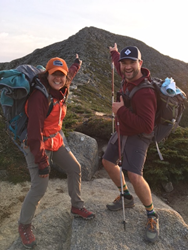 L.L.Bean employees Meghan Pike and Nicholas Butler point to the summit of Mount Katahdin as they hike the final section of the L.L.Bean Appalachian Trail Relay.

A total of 86 L.L.Bean employees participated in the relay from all areas of the company, from corporate offices and operations centers in Maine to retail employees from 12 other states.

International outdoor retailer L.L.Bean, best known for its Maine-made L.L.Bean Boots, spent the summer hiking the 2,180-mile Appalachian Trail (AT) from Georgia to Maine. To celebrate the 50th anniversary of the National Trails System and inspire others to get outside, L.L.Bean employees hiked in pairs along sections of the trail for each of the last 160 days. Beginning April 18 at Springer Mountain in Georgia, the relay reached Mount Katahdin in Maine this morning.

The last team of the L.L.Bean AT Relay began their final assent in the early darkness of Maine’s Baxter State Park, reaching the summit of Mount Katahdin, the northern terminus of the Appalachian Trail, just before 10 a.m.. Meghan Pike and Nicholas Butler, who both work at the L.L.Bean store in Bangor, Maine, were selected to be the final relay team. Their enthusiasm to finish the trail was not hampered by 25°F temperatures or 30 mph wind gusts at the summit.

A total of 86 L.L.Bean employees participated in the relay from all areas of the company, from corporate offices and operations centers in Maine to retail employees from 12 other states. Each team hiked a section of the trail ranging from 27 to 118 miles. Along the way, hikers captured photos and shared their journey using the hashtag #LLBeanATrelay on social media.

L.L.Bean and its employees have supported the preservation of the Appalachian Trail for decades through charitable support of the Appalachian Trail Conservancy (ATC) and its partner trail clubs, as well as hands-on trail maintenance. Since 1980 the company has organized trips for employees who volunteer their time for a week in the northern Maine woods to keep an 18.5-mile section of the trail passable for the thousands of hikers who pass through each year. This is the first time the company has organized a hike covering the entire trail.

The Appalachian Trail is one of eleven National Scenic Trails, as established by the National Trail System Act of 1968.

About L.L.Bean, Inc.
L.L.Bean, Inc. is a leading multichannel merchant of quality outdoor gear and apparel. Founded in 1912 by Leon Leonwood Bean, the company began as a one-room operation selling a single product, the Maine Hunting Shoe. Still family owned, Shawn Gorman, great grandson of Leon Leonwood Bean, was named Chairman of the Board of Directors in 2013. While its business has grown over the years, L.L.Bean continues to uphold the values of its founder, including his dedication to quality, customer service and a love of the outdoors. In the past five years, L.L.Bean has donated over $6 million toward conservation and land stewardship. L.L.Bean currently operates 41 stores in 17 states across the United States, along with 27 stores in Japan. The 220,000-sq. ft. L.L.Bean retail store campus in Freeport, ME, is open 24 hours a day, 365 days a year and welcomes more than 3 million visitors every year. L.L.Bean can be found worldwide at http://www.llbean.com, Facebook, Twitter, YouTube, Pinterest, Google+ and Instagram.

L.L.Bean employees Meghan Pike and Nicholas Butler celebrate their completion of the final section of the L.L.Bean Appalachian Trail Relay.