L.L.Bean Looks Ahead to Summer with First Glimpse at Free Outdoor Concerts 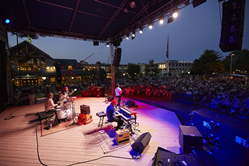 L.L.Bean's annual Summer in the Park free outdoor concert series begin each year on July 4. Devon Gilfillian played the at L.L.Bean July 4, 2018. The War And Treaty will open the series this year.

Maine based outdoor retailer L.L.Bean is ready to get you outdoors this summer with a season full of free activities at its flagship retail campus in Freeport, including the annual Summer in the Park outdoor concert series presented by Mastercard.

Maine based outdoor retailer L.L.Bean is ready to get you outdoors this summer with a season full of free activities at its flagship retail campus in Freeport, including the annual Summer in the Park outdoor concert series presented by Mastercard. L.L.Bean announced five free concerts in the popular series including The War And Treaty, Gone West featuring Colbie Caillat, AJR, Mat Kearney and Anderson East.

“So many of us look forward to enjoying summer in Maine outdoors with family and friends, and our Summer in the Park concert series is one of the highlights of the season,” said Kelly Warsky, manager of brand experience at L.L.Bean. “We want to share just a hint of the great events we have in store.”

Summer in the Park concerts will include:

L.L.Bean’s full schedule of Summer in the Park events including additional concerts will be released in May.

About L.L.Bean, Inc.
L.L.Bean, Inc. is a leading multichannel merchant of quality outdoor gear and apparel. Founded in 1912 by Leon Leonwood Bean, the company began as a one-room operation selling a single product, the Maine Hunting Shoe. L.L.Bean is a family-owned Maine company led by Executive Chairman, Shawn Gorman, the great-grandson of Leon Leonwood Bean; and Stephen Smith, President and CEO. While its business has grown over the years, L.L.Bean continues to uphold the values of its founder, including his dedication to quality, customer service and a love of the outdoors. In the past ten years the company has provided over $30 million to nonprofit organizations. L.L.Bean currently operates 44 stores in 18 states across the United States, along with 28 stores in Japan. The 220,000-sq. ft. L.L.Bean retail store campus in Freeport, ME, is open 24 hours a day, 365 days a year and welcomes more than 3 million visitors every year. L.L.Bean can be found worldwide at http://www.llbean.com, Facebook, Twitter, YouTube, Pinterest, and Instagram.