Proposed Changes to Labeling of Alcoholic Beverages in the U.S. 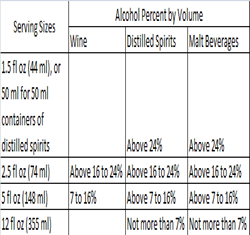 Registrar Corp can assist bottlers and importers of alcohol beverages with Serving Facts chart or other labeling concerns.

Bottlers and Importers of alcoholic beverages may now include Serving Facts and calorie information on labels. The Alcohol and Tobacco Tax and Trade Bureau (TTB) has proposed to require alcohol content expressed as percentage of alcohol by volume and a “Servings Facts” chart on labels of alcohol beverages subject to TTB's labeling jurisdiction under the FAA act. The final ruling has not been made and the statements are currently optional. The TTB may now issue a certificate of label approval for labels that include the optional Serving Facts chart provided that the optional Serving Facts chart complies with Ruling Number 2013-2.
Registrar Corp is now able to help alcoholic beverage bottlers and importers voluntarily comply with TTB's new proposed labeling regulations.

Regulatory Background:
On July 31, 2007, the TTB published a notice of proposed rulemaking which stated TTB's proposals to require a statement of alcohol content, expressed as a percentage of alcohol by volume, on all alcoholic beverage products and to require a Serving Facts panel which would include a statement of calories, carbohydrates, fat, and protein. TTB proposed to make these new requirements mandatory three years after the publication of the final rule in the Federal Register. Currently, a Final Rule concerning this has not yet been published.

Serving Facts panels used by alcohol bottlers and importers are required to include the following information:

TTB opened the proposed rule for comment to the public. Including the extension to the comment period, the public was required to submit their comments to TTB on or before January 27, 2008. At this time, it does not appear that TTB has published a Final Rule concerning Labeling and Advertising of Wines, Distilled Spirits and Malt Beverages (Serving Facts Labeling).

Current Policy:
On May 28, 2013, TTB published a ruling stating TTB's interim policy permitting the voluntary use of Serving Facts statements in the labeling and advertising of alcoholic beverages, pending the completion of rulemaking. Bottlers and importers of alcoholic beverages may choose to provide voluntary Serving Facts statements if they use the serving sizes shown on the chart, which take into account the fact that there are significant variations in the alcohol content of different products within each commodity. Statements of calorie or carbohydrate content made on labels or in advertisements must be truthful, accurate, specific and non-misleading.

How Registrar Corp can help:
Registrar Corp can assist bottlers and importers of alcoholic beverages with Serving Facts chart or other labeling concerns. Registrar Corp’s Label & Ingredient Review service will research how all TTB’s regulations and guidances will impact a product's label and assist in ensuring compliance as you export to the U.S. For more information about TTB labeling, food ingredients, and other FDA regulations, please contact Registrar Corp 24/7 at http://www.registrarcorp.com/livehelp or call us at +1-757-224-0177. Or, tweet Registrar Corp (@RegistrarCorp) with specific questions.