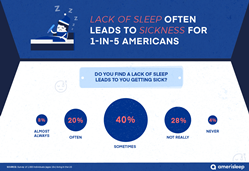 “Counting on a restful night’s sleep is vital to a person’s physical and mental health. It’s concerning to see the disparity in the amount of lower-income families not receiving a flu shot, which raises the importance for people to understand the affordable access they have to the vaccine."

With World Sleep Day — which was established to celebrate the many benefits of healthy sleep — just days away, new research from Amerisleep’s Sleep Science team looks at how Americans’ sleep hygiene is impacting their wellness this flu season. The study found that only 38% of Americans report getting the recommended 7-8 hours of sleep per night, and 1-in-5 Americans acknowledge that a lack of sleep often leads to them developing an illness.

While Coronavirus is rightfully commanding the headlines, the flu (or influenza as it’s known in medical circles) caused over 647,000 hospitalizations and 61,200 deaths in the U.S. last season. This season, the flu has already caused over 10,000 deaths, including an unprecedented 105 deaths amongst children.

With sleep widely acknowledged for its preventative and restorative qualities when it comes to illnesses, findings from the Amerisleep ‘Flu Season & Sleep’ study show that not all demographics are getting the recommended dose of Zzz’s. Even more cause for concern, the findings — which resulted from surveying 1,000 individuals (ages 18+) living in the U.S. — illustrates a significant disparity amongst income brackets when it comes to receiving flu vaccines.

“Counting on a restful night’s sleep is vital to a person’s physical and mental health,” said McKenzie Hyde, a Certified Sleep Science Coach and member of Amerisleep’s Sleep Science team. “It’s concerning to see the disparity in the amount of lower-income families not choosing to receive a flu shot, which raises the importance for people to understand the affordable access they have to the vaccine. Equally important to understand are the added benefits sleep provides when it comes to helping the body fight off and recover from illness.”

Other highlights from the report, include:

To learn more about all things sleep from a certified sleep expert and experienced sleep professionals, visit the Sleep Science research guide center.

Gen Z is Getting the Sleep They Need

Chronic Lack of Sleep Increases the Odds of Illness