“Laina and the Vamp,” the second novella in this new series of Ebooks by B.K. Smith, author of the Lipstick Mountains Memoirs, has now been released by Madison Avenue Publishers LLC. 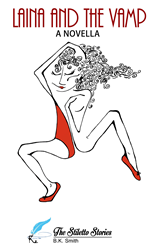 'Laina & The Vamp' by BK Smith

There are many kinds of relationship problems: being seduced by a vampire is one of them.

Following “Just Desserts,” which focused on a young Jewish woman’s descent into madness, in B.K. Smith's “Laina and the Vamp” our attention is now drawn to Laina, a dancer who lives in Fantasy Noir, and Vladimir, your basic vampire and smooth operator.

Laina is completely absorbed in her dancing, spurred to invention by music, gloriously involved in creating art with her body, viewing dance not as something she does, but as a natural way of life. She seems to be the type of contemporary woman who has traveled the world, and has gifts and (of course) flaws, but who is self-sufficient. But then, she meets the “Prince of the Night.” Or should I say until?

There are many kinds of relationship problems: being seduced by a vampire is one of them. Vladimir courts Laina with music, with slow dances, with promises that are not meant to be kept and dreams never meant to be fulfilled, with gifts, both extravagant and thoughtful B. K. Smith’s black and white (and sometimes red) pen drawings underscore the contrast between the human who loves all things white and gossamer, and the vampire who loves black, and sometimes red. The passions between them makes each of them tremble in privacy, but they dance as one. Laina is enticed, she resists, she longs for him, and she rejects him, for they are as different as day and night. Heaven and Hell. Can a human spirit withstand the blandishments of a Vamp?

B. K. Smith credits much of her inspiration for this work. Her drawings to Edward Gorey; her conception of dance to Isadora Duncan and Martha Graham; her vampire to Bram Stoker and Anne Rice; and her writing style to Joyce Carol Oates and Iris Murdoch.