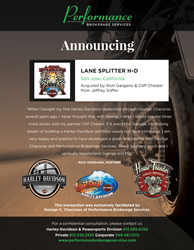 Located in Silicon Valley close to the neighborhoods of Morgan Hill and Oakland, it is easily accessible from all freeways. It is one of the largest dealerships in Northern California with millions of dollars in Harley-Davidson inventory and nearly 30,000 square feet. Customers say it is a one stop shop for everything Harley-Davidson. Seller, Jeffrey Soffer also owns Stinger Harley-Davidson in Medina, Ohio and Alligator Alley Harley-Davidson in Sunrise, Florida and is best known as a billion-dollar real estate developer in Miami, Florida.

Following the purchase, Rich Gargano commented, “When I bought my first Harley-Davidson dealership through George Chaconas several years ago, I never thought that with George’s help I would acquire three more stores with my partner Cliff Chester. If it wasn’t for George, my lifelong dream of building a Harley-Davidson portfolio would not have come true. I am very happy and grateful to have developed a great relationship with George Chaconas and Performance Brokerage Services.”

The dealership will remain at its current location at 1551 Parkmoor Avenue, San Jose, California 95128.

George C. Chaconas, the exclusive agent for this transaction and the head of the National Harley-Davidson and Powersports Division for Performance Brokerage Services commented, “The most rewarding part of my job is being involved in life changing events. When I met Rich for the first time, he expressed his interest in buying a Harley-Davidson dealership. Only a few years later, he is the proud co-owner of an entire Harley-Davidson dealership group in the Bay Area. Between Rich and Cliff, they have accomplished so much in such a short period of time and I am grateful to have been part of it.”