In response to the continuing de-emphasis on foreign language learning in U.S. higher education despite the many internationalization initiatives being spearheaded by educational institutions, Bridge, in conjunction with New Mexico State University and Oracle, presented on the importance of language learning for the development of intercultural skills and global competence at this year’s NAFSA Region II Conference for international educators. 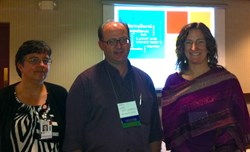 Miller, Longwell and Rooney at the NAFSA conference

Technical skills are not enough any more. More focus is needed on speaking other languages, respect for others, and tolerance for cultural differences.

Bridge, New Mexico State University, and Oracle argued last month at the NAFSA Region II conference for international educators that language learning is key for the development of intercultural skills - skills that are in high demand in today’s globalized world.

The idea to create a session on this topic came from Lisa Rooney, Vice President of Teacher Training and Education Abroad at Bridge, and a language educator with over 20 years of experience in the field. “After attending The Forum on Education Abroad’s annual conference this year in Chicago,” Rooney explained, “on the one hand, I was pleased to hear the abundance of discussion about the importance of global competence; yet, on the other hand, I was horrified at the lack of discussion about the development of world language skills and the relationship that language learning has to the development of intercultural skills.” When she approached many of her colleagues in international education about this apparent disconnect, Rooney stated that a common response that she received was: “Everyone speaks English.”

Hence the idea for a presentation for international educators entitled: Getting Past: “Everyone Speaks English.” Target language proficiency as a key contributor to the development of intercultural skills.

The session was divided into three parts, followed by debate and discussion. The first part, led by Rooney, presented various models of intercultural competence and the role that target language proficiency plays in the development of intercultural skills. The idea of linguaculture was introduced, a term coined by Alvino Fantini, a well-known language and intercultural educator and researcher, and a word that captures the idea that language and culture cannot be separated.

The second part of the session was led by Jeffrey Longwell, Professor of Spanish at both the undergraduate and graduate levels at New Mexico State University, and the faculty advisor for language students who study abroad. A firm believer in both learning a foreign language and studying abroad, he presented the results of a survey that had been administered to faculty, administrators, and students. The survey asked about their beliefs regarding how much knowing the host language of the country where students study abroad contributes to the development of intercultural skills.

"Our survey results showed positive reinforcement for knowing the language of the country in which students studied abroad or at least being involved in learning the language in a formal setting while abroad." summarized Longwell. "Comments included that it made it easier for them to become more engaged with the local people and cultures. A majority of the students indicated that their language skills not only helped them during their experience, but also would be beneficial to them on a long-term basis."

The third part of the session brought the audience’s attention to the “real world” by having a member of the business community speak to the importance of language and intercultural skills in today’s workplace. Heidi Miller, Director of Cloud Deal Management at Oracle, led this conversation and provided first-hand accounts of how knowing the language and culture of the country where you are doing business can go a long way towards building relationships and establishing trust.

“Technical skills are not enough any more”, stated Miller. “More focus is needed on speaking other languages, respect for others, and tolerance for cultural differences.”

The discussion following the presentation touched upon various topics from how intercultural skills can be better developed in the foreign language classroom at home to the effectiveness of certain study abroad models (such as “island programs” where American students take their classes abroad in English with other American students, or “study tours” which may only last 10 days and often do not include a language component). Participants also brought up larger questions, such as how to garner more support for language learning in U.S. education where a monolingual and, by default, an ethnocentric approach has traditionally been accepted.

“Changing the monolingual mindset in the United States is the ultimate challenge and a lofty goal”, said Rooney, “and this session is a first step in the right direction. We hope to get people on board from both the education and business communities to work together on initiatives which will increase awareness, and show that, in order for the United States to remain competitive in today’s globalized world, we must place the utmost value on multilingualism.”