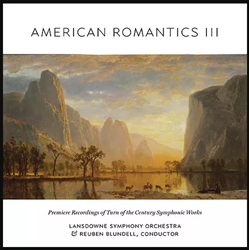 We’re so excited to have our unique work acknowledged. - Reuben Blundell

The Lansdowne Symphony Orchestra, a community orchestra established in 1946 in suburban Philadelphia, was honored with a national award by The American Prize for its première recording released by New Focus Recordings of never-before-recorded American Romantic music selected from the Fleischer Collection of the Philadelphia Free Library.

What: The American Prize
Who: Lansdowne Symphony Orchestra
Why: Première recording of never-before-recorded American Romantic music
When: September 27, 2019

More about the Lansdowne Symphony Orchestra
Founded in 1946, the Lansdowne Symphony Orchestra is one of the oldest community orchestras in the Greater Philadelphia area. Led by Music Director Reuben Blundell and Concertmaster Herold Klein a retired Philadelphia Orchestra violinist, the talented musicians who form the core of the 75+ members of the LSO come from many walks of life and all share a strong love of music. The LSO season runs from October to April, presenting five concerts at the Upper Darby Performing Arts Center.

More about the American Romantics recording
This world-premiere recording of music by American composers, showcases previously unrecorded music of the late 19th and 20th century. The composers represented were either native born or had recently immigrated. Some drew on Americana melodies while others reflected on the prevailing Central European compositional style of the day. Music Director Blundell unearthed these pieces from the rich troves of the Edwin A. Fleischer Collection of Orchestral Music at the Free Library of Philadelphia.

More about the American Prize Ernst Bacon Memorial Award
The American Prize Ernst Bacon Memorial Award for the Performance of American Music recognizes and rewards the best performances of American music by ensembles and individual artists worldwide, based on submitted recordings. Focused exclusively on works by American composers from any period and in any style, the contest not only judges performances, but in the case of new or unfamiliar works, the music itself. Ernst Bacon (1898—1990) was one of the pioneering generation of composers who, along with Thomson, Copland, Harris, and others, found a voice for American music. Winner of a Pulitzer Scholarship for his Symphony in D minor, he set out to create compositions that expressed the vitality and affirmative spirit of America.

More about the Fleischer Collection
The Edwin A. Fleisher Collection of Orchestral Music is the world’s largest circulating collection of orchestral performance sets – with over 22,000 titles – and provides materials to recognized performance groups around the globe for concerts and recordings. It houses virtually the entire standard repertoire, and is also known for its many rare and out-of-print works available for lending around the world. It is a unique source of 19th and 20th century American music, and has a longstanding commitment to promoting new, noteworthy, and overlooked works.

More about Reuben Blundell
Reuben Blundell has been Music Director of the Lansdowne Symphony Orchestra since 2014. Over the past five years, he and the musicians have built on the orchestra’s great talent and potential on stage and in the community, making it one of Pennsylvania’s great artistic treasures.