“A Beacon of Hope” from Christian Faith Publishing author Larissa Self is an entrancing story of a plague with no cure that spread throughout the world and how people could survive and escape not becoming the next prey. 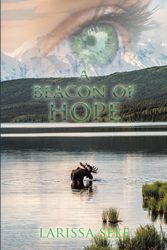 “A Beacon of Hope” is a captivating story that will thrust the readers into the narrative, allowing them to experience the characters’ losses, fears, challenges, and even their hope. “A Beacon of Hope” is the creation of published author Larissa Self, a woman who grew up overseas and returned to the United States to enroll in college where she received an electronics degree. She homeschooled her three youngest children for twelve years and was a math tutor for other homeschooled students.

Self writes, “In the final chapter of The Riley Cooper Series of Hope, the plague that ravaged the world of human life still has no cure. Survivors have fled the cities in the hopes of not becoming its next prey. In their dire need to save themselves, many survivors became victims of false saviors that have resurrected some of history’s worst practices.

“The murder of a dear friend flips Riley’s world upside down. Frightened that the rest of the team being held hostage will succumb to the same fate, she, along with her family and friends, sets out to get them back. What they find is far beyond anything any of them could have imagined.

“Though Jackson, Wyoming, has become a beacon of hope for many, obstruction and hardship caused by others has planted the seed of doubt in the minds of some survivors. But Divine Providence has reminded Riley of His promise:

“‘The day of tyranny has returned, but God has heard the cry of His people and has given them hope. That hope today, my friends, is us.” (Riley Cooper).’”

Published by Christian Faith Publishing, Larissa Self’s new book is an engrossing narrative that tests the readers in having hope in life regardless of the situation they are going through in life.

With this book, Self takes the readers on a fascinating journey of one woman’s fight for survival in a world ravaged by a disease, but through it all she keeps her faith by staying focused on the only true beacon of hope, Jesus Christ.

View a synopsis of “A Beacon of Hope” on YouTube.

Consumers can purchase “A Beacon of Hope” at traditional brick & mortar bookstores, or online at Amazon.com, Apple iTunes store, or Barnes and Noble.

For additional information or inquiries about “A Beacon of Hope,” contact the Christian Faith Publishing media department at 866-554-0919.