Larry L. Wallace’s newly released “Pass It On” is an engaging look into the teachings of Howard Woods

“Pass It On” from Christian Faith Publishing author Larry L. Wallace is a celebration of key knowledge shared by Grand Master Howard Woods through trainings provided to upcoming Free Masons. 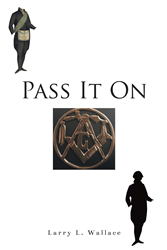 “Pass It On”: an enjoyable philosophical discussion. “Pass It On” is the creation of published author Larry L. Wallace, who joined the Masonic Organization in 1982 and has held various positions in the Masonic organization. Wallace studied under the Howard Woods’s Grand Master of Arkansas for two years. He received all of his houses before graduating college in 1984, Scottish Rite and York Rite. Wallace became a Shriner in 1987 and a thirty-third in 2004.

Wallace shares, “it has been so long, but he is gone. Pass It On started by me attending a volunteer session to work on the temple at 4th and State in Pine Bluff, Ar. I did not know that I would begin my education in masonry there. I was challenged by Howard Woods on what I was wearing. He said I did a good job of answering the question, but that masonry was much deeper than emblems. He said, ‘If you want to learn, I will be here every Saturday to teach.’ The teaching was great but also provided a meal on Saturday, and that made it the greatest to a college student. I went on to be the President and Founder of the Haygood 357 study club on the campus of University of Arkansas at Pine Bluff. And from that point, I have continued in masonry to this day.”

Wallace shares in hopes of spreading the knowledge that helped to shape and guide his work within masonry.

Consumers can purchase “Pass It On” at traditional brick & mortar bookstores, or online at Amazon.com, Apple iTunes store, or Barnes and Noble.

For additional information or inquiries about “Pass It On,” contact the Christian Faith Publishing media department at 866-554-0919.