Actor, writer, photographer Larry Laverty is an internationally recognized voice in wildlife conservation. His new book "Power and Majesty: The Plight and Preservation of the African Elephant" demonstrates the magic of Africa's elephants and the threats they face. 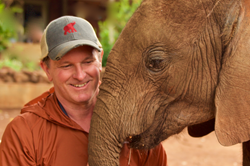 "The elephant has taught me a lot about love, surely as much as any human being has " -Larry Laverty

Hollywood actor Larry Laverty fell in love with elephants a few years ago and made it his life's work to save those who survive. The continent of Africa has long been a haven for wildlife but over the past century or two, humans have destroyed much of the beauty that once was. With the current threats of global warming and a rapidly expanding human population, Africa's elephants are among those animals suffering the most. Humanity ironically knows surprisingly little about these majestic animals and that's why Laverty published his book "Power and Majesty: The Plight and Preservation of the African Elephant."

For 30 years, Laverty immersed himself in a successful acting career based in Hollywood and San Francisco. But from a young age, he loved animals and felt a special connection with them. Eventually, this love and concern overcame his pursuit of movie roles to dominate his life. In 2013, he took part in the first Global March for Elephants, an international movement calling attention to the devastating impacts of the ivory trade. Laverty's passion for the welfare of elephants was set. He soon became a voice for elephants on social media, soon taking trips to Africa to learn more about the elephants he appreciated so much. From his photographs and writings, a wave of support came encouraging him to create a book.

It took seven trips and nearly a year of his life to gather the images and observations presented in "Power and Majesty." Laverty traveled to ten African countries and explored every type of ecosystem where elephants are found, from desert to rainforest. The release of the book has coincided with a speaking campaign to reach even more people with reasons why they should care about elephants. As Laverty has said, "If we can't save the few remaining elephants of Africa, what hope do we have of saving the planet?"

Larry Laverty's book "Power and Majesty: The Plight and Preservation of the African Elephant," published by LID Publishing of London, is available through Amazon and most book outlets.