“Early Identification” from Christian Faith Publishing author Larry Pope is a well crafted and unique thriller that takes on the idea of eliminating potential threats before they are truly guilty. 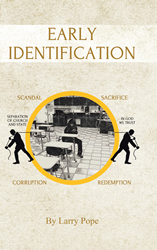 Larry writes, “Some government officials want to eliminate crime by hiring school administrators in zip codes with the highest rate of incarcerations (murder factories) to identify future criminals. The identified kids will begin to disappear, and the FBI agents working the cases will be able to cover up the methods used to rid these future threats to society. They plan to test this operation in a city with a population of around a hundred thousand people.

Sam Good, a devout Christian and FBI agent, is repeatedly tormented and attacked. When he discovers the attackers are his fellow agents at the bureau, he transfers, and then resigns, so he can return undercover to figure out the reason for the attacks. He and a couple of companions discover the scandal to identify future criminals, and he realizes that he was forced out of the unit because of his Christian view of the world. As Sam and his companions try to gather enough evidence for a case against the FBI agents, a race emerges. Will Sam and his cohorts be able to gather the evidence and get a conviction before they are discovered and killed?

Early Identification is an action-packed thriller that depicts the struggles of society to deal with crime, corruption, and racism using secular methods. It illuminates the reality that a systemic failure to teach citizens the scientific reasons for trusting in God (In God We Trust) has led to a dysfunctional society where two opposing worldviews are at war for control of educational and governmental policies. In a tale full of biblical values, sacrifice and redemption are required to overcome scandal and corruption.”

With action packed story-telling and a cast of well-crafted characters, this tale packs a punch.

For additional information or inquiries about “Early Identification”, contact the Christian Faith Publishing media department at 866-554-0919.