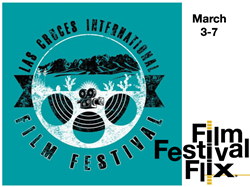 For the 2021 festival, Executive Director Ross Marks is optimistic about going virtual. Noting that LCIFF's attendance has grown with the in-person fest in recent years, he adds, "(Now) because of this virtual platform, we have 38 countries participating, and the friends and families associated with all those films can watch.”

The Virtual Film Festival model has proven successful for many Festivals, from big names like Sundance, to those niche fests you may not have heard much about, like the Silicon Valley Jewish Film Festival, which saw unprecedented audience, sponsor, and revenue increases during their 2020 virtual run on Film Festival Flix. The virtual model also increases opportunity for greater audience diversity, and participation from underrepresented voices who may not have had the resources to attend in-person fests in the past.

Both LCIFF and Film Festival Flix lean in to amplifying those voices.

The LCIFF lineup this year includes the debut presentation of Native Cinema, honoring Native American films and filmmakers. Also included in the festival programming will be the submissions from this year's 48-hour filmmaker competition, Reimagining Borders, which asked teams or individuals to make a movie in just two days, abiding by these COVID-safe rules:

All footage must be shot at home.
No shooting outside except for in your backyard. You may not shoot in public space or common space.
You may physically film only with people in your household.
You may collaborate remotely, through Zoom/Skype/FaceTime, etc., and edit footage together.
Cast members may film themselves separately and share files electronically.
Film must include at least one scene over Zoom/Skype/FaceTime.

Winners will be announced and awarded cash prizes at the film festival awards ceremony on March 6.

Tickets to these programs, and passes to the festival in its entirety, March 3-7, are on sale now and may be purchased at FilmFestivalFlix.com.

Festival patrons will be able to watch the screenings, participate in discussions, and more from the comfort of home, on any device—Smart TV, computer, tablet, or phone. Film Festival Flix is available on Apple TV, Amazon Fire TV, Android TV, Roku, and to stream online.

Tickets on sale now for LCIFF, March 3-7.Get your tickets on Film Festival Flix.