“The Six Secrets of Annaleseya” from Christian Faith Publishing author Lasharitta Mckinney is an entertaining children’s narrative that takes readers on a journey in a new neighborhood where unexpected secrets are waiting to be discovered. 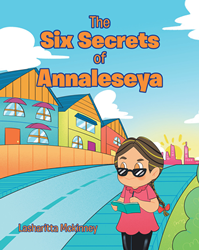 Mckinney shares, “Let me introduce you to Annaleseya better known as Anna. She was the third child in her family. She was a very funny, lovable, feisty little girl who lived in the country until one day her father announced they were moving to the big city. Anna, who was so excited, decided to pack first. The family moved to the big city when Anna saw that her neighborhood had many colorful houses, which she thought had to have secrets, and she was going to find out what they were. So she became Anna the Secret Buster, and oh, my, the secrets she discovered.”

Published by Christian Faith Publishing, Lasharitta Mckinney’s new book will delight and entertain as readers race to see what Annaleseya will uncover.

Mckinney shares a lighthearted and amusing story of a feisty little girl with a lot to learn and a curiosity to match that will bring entertainment to the whole family.

Consumers can purchase “The Six Secrets of Annaleseya” at traditional brick & mortar bookstores, or online at Amazon.com, Apple iTunes store, or Barnes and Noble.

For additional information or inquiries about “The Six Secrets of Annaleseya,” contact the Christian Faith Publishing media department at 866-554-0919.