“Last Draftees,” a hard-hitting novel by four men who experienced the horror of the draft, exposes corruption and racism under three presidents during the Vietnam War

Page Publishing’s “Last Draftees” by Keith Rogers, Robert Foust, Willie McTear, and Larry Keller takes an unvarnished look at the U.S. Selective Service System from its roots in the Civil War to its suspension in 1973 after widespread outcry and protests by the American public. 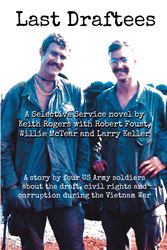 Keith Rogers is a freelance writer and forty-year career journalist who worked as a senior staff writer for the “Las Vegas Review Journal” and the San Francisco Bay Area’s “The Valley Times.”

With Robert Foust, Willie McTear, and Larry Keller the authors have completed “Last Draftees,” a historic novel based on their individual experiences during the Vietnam era. This new release takes a gripping and honest look at the history of war in the United States and the social discord and moral decline caused by decades of military conflicts.

Michigan State University Professor Emeritus Robert L. Green, PhD, writes in the Foreword: “This book is about conscription, but more so about the corruption that surrounds the act of conscription and how it affects society in a negative light. It is also about the state of the nation racially and morally, about patriotic love and hatred, about greed and colonization of foreign lands, and about abuse of power and how that corrodes the core of the republic, our democracy. This book is a must-read for these very reasons.”

Published by Page Publishing, the novel by Keith Rogers, Robert Foust, Willie McTear, and Larry Keller details selective service and the consequences it caused throughout United States history. The Vietnam War was the vehicle that brought to light not only widespread corruption associated with conscription but also America’s political shortcomings. In the end, people demanded selective service be stopped because it affected poor and minorities disproportionately. More importantly, the book focuses on abuse of power and the racial divide that was spawned during this era and continues with heightened awareness today.
“Last Draftees” was written in opposition to a national commission’s recommendation to expand the draft registration requirement to women, 18- to 26-years-old. The House Armed Services Committee is expected to hear the issue in 2021.

“Last Draftees” can be purchased at bookstores everywhere, or online at the Apple iTunes Store, Amazon, Google Play, or Barnes and Noble.