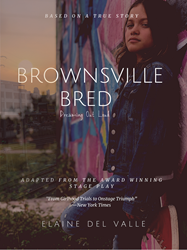 It's up to us (Latinx storytellers) to share our unique voices. In the end I believe that the book is about being able to let go...It's about not making or allowing excuses to hold us back and about turning our devastation into motivation.

"Brownsville Bred: Dreaming Out Loud" (adapted from her stage play and based on Elaine Del Valle's true coming-of-age in 1980’s Brownsville Brooklyn, New York) is a young adult fiction novel told in a series of vignettes—some funny, some heartbreaking, some harrowing—it tells one girl’s journey growing up in the toughest projects in Brownsville, Brooklyn--the crime capital of New York.

"Brownsville Bred: Dreaming Out Loud" is a true-to-life celebration of a young person with a remarkable spirit who triumphs over tragedy. Crime, addiction, AIDS and poverty mix with the joys of family, hope, salsa and rap, to create a truly remarkable read that chronicles a young altruistic Latina’s journey to forgiveness and self worth.

Del Valle, now an award-winning film director and producer, sought to express her young Urban-Latina voice and make it available on bookshelves everywhere.

"Brownsville Bred" was first developed as a stage play by Ms. Del Valle during her professional acting studies at the legendary Wynn Handman Studios in New York City's Carnegie Hall.

"Elaine Del Valle is a leader, a consummate professional who adds immeasurably to anything she becomes involved with; a leader in her community, an inspiration to young female directors and writers, and an artist whose presence is felt far beyond the work she produces," said Wynn Handman.

As a stage play, "Brownsville Bred" was directed by Pamela Moller Kareman and went on to receive critical acclaim.

Critics raved during its off Broadway debut (at 59E59 Theaters).
Anita Gates at The New York Times called it “From Girlhood Trials to Onstage Triumph”.
The Journal News’ Peter Kramer wrote “Del Valle’s writing is natural, her imagery powerful, her life’s journey hopeful and harrowing.”
Frank Scheck at The New York Post wrote, “Compelling...You’ll be cheering her unstoppable joy and the inner strength it took to earn it.”

Now Del Valle shares her story as a young adult fiction novel, "Brownsville Bred:Dreaming Out Loud" available on Kindle as an ebook and in paperback on Amazon and wherever books are sold. Books (in all forms) are $9.99.

“It's up to us (Latinx storytellers) to share our unique voices. In the end I believe the book is about being able to let go…It’s about not making or allowing excuses to hold us back and about turning our devastation into motivation,” says Del Valle.

Elaine Del Valle is an award-winning film director, producer, actor, writer and casting director.
She first garnered critical acclaim with her autobiographical, Off-Broadway, one-woman stage play, "Brownsville Bred” for which she won the 2011 HOLA award for excellence in playwriting, and was named "Trendsetter" at the Multi-Cultural Media Forum. Elaine has won numerous Best Director and Best Short Film awards. Elaine’s 2019 short film, "Me 3.769", was supported by a grant from the Sundance Institute, has screened in competition at top tier festivals and premiered on HBO (2019). Elaine was featured in the PBS documentary "Beating The Odds", alongside luminaries such as Michelle Obama. In 2019 Miami News Times named her as “One of 5 Filmmakers to Watch”.