“The Edge of Nowhere” from Christian Faith Publishing author Laura Bratcher Goins is a captivating novel that follows Anna, an orphaned girl, who heads west aboard a train where she befriends an older gentleman whose goal is to rewrite his past. 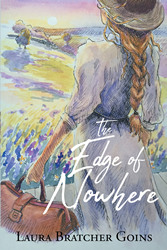 “The Edge of Nowhere”: a fascinating life story of a girl who is forced to grow up quickly and begin life on her own where she meets new people and faces a variety of situations. “The Edge of Nowhere” is the creation of published author Laura Bratcher Goins, a daughter of a Southern Baptist pastor. She grew up in Kentucky’s bluegrass region. Now, she lives an empty-nester life in southeastern Pennsylvania with her husband, Bobby, and their two Cavalier Spaniels.

Goins shares, “The tag pinned to Anna’s dress simply read, ‘Annaleigh Thompson; Destination: Finley Valley.’ Annaleigh Thompson wasn’t the only orphan forced to leave Logan’s Gap Children’s Shelter. Between 1820 and 1900, the few orphanages that existed had become so overcrowded they had no choice but to release young men and women as early as their fourteenth birthday, expecting them to support themselves with no help from the community.

“Frightened and unsure of herself, Anna boards the westbound train headed for a region so mountainous and rugged she trembles at the thought. It was only the positive promptings from Mrs. McAfee that kept her from running away in the dark of night, not giving any thought how she would survive on her own.”

“Along her journey, she meets Professor Higgins who is on his own journey to right some wrongs from his past. Together, this unlikely pair experiences an abundance of happiness as well as deep sorrow and tragedy. Along the way, lifelong friendships are made and life lessons learned. Anna is forced to grow up quickly, but with Mrs. McAfee’s faithful prayers and the professor’s guidance, she finds the true meaning of life and much, much more.”

Published by Christian Faith Publishing, Laura Bratcher Goins’s new book is a beautiful ride along story of friendship and making fresh starts after the struggles that have beaten us down to the ground.