The Only Way to Truly Reform the Criminal Justice System is to Fix the Pervasive Racial Bias on All Levels: Arrest, Charging, Fact Finding, Trial, and Sentencing 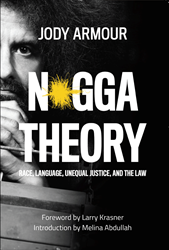 "A must-read for anyone interested in understanding and dismantling mass incarceration.”--Chesa Boudin, Chesa Boudin, District Attorney of San Francisco

According to Jody Armour’s forthcoming book "N*gga Theory: Race, Language, Unequal Justice, and the Law," America’s criminal justice system is among the deadliest and most racist in the world, and it disproportionally targets Black Americans, who are also disproportionately poor, hungry, houseless, jobless, sick, and poorly educated. By every metric of misery, this nation does not act like Black Lives Matter.

Armour calls for bold action: electing progressive prosecutors, defunding or dismantling the police, abolition of the prison industrial complex. But only after eradicating the anti-black bias buried in the hearts and minds of millions of Americans and baked into our legal system will we be able to say that Black Lives Matter in America.

ABOUT THE AUTHOR:
Jody David Armour (Negrophobia and Reasonable Racism) is the Roy P. Crocker Professor of Law at the University of Southern California. He has an expertise in the relationship between racial justice, criminal justice, and the rule of law, free speech claims, the intersection of race, politics, popular culture, and legal decision making, as well as torts and tort reform movements. Armour speaks widely on the Black Lives Matter movement’s agenda.

ABOUT THE BOOK:
"N*gga Theory: Race, Language, Unequal Justice, and the Law" will be published on August 18, 2020, by LARB Books. Philadelphia District Attorney Larry Krasner wrote the foreword, and Melina Abdullah, the co-founder of Black Lives Matter Los Angeles, provided the introduction to the book, which has been endorsed by the nation’s foremost progressive prosecutors and legal experts.

REVIEW COPIES AND MEDIA INTERVIEWS:
To request a review copy of "N*gga Theory" or to schedule an interview/event with Jody Armour, contact publicist Nanda Dyssou of Coriolis Company at nanda@corioliscompany.com or 424-226-6148.