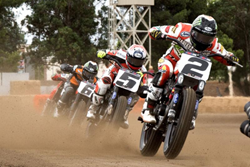 The nation’s top professional motorcycle racers are expected in Phoenix to compete in the Law Tigers Arizona Mile, presented by Indian Motorcycles. Phoenix is the fourth stop of the 18-race American Flat Track series which began at the Daytona TT in March and will award the number-one plate to the top rider in Southern California in October.

“Flat track racing was born in America and has deep roots on dirt tracks where riders race handlebar to handlebar at triple digit speeds and draft each other on the front and back stretches NASCAR-style, which can produce several lead changes and exciting racing lap after lap,” noted Chris Morgan, event co-promoter. “It is the ultimate pure competition with the riders in full view of the fans as they wrestle their big-motor machines on the track and the weekend promises to be very entertaining.”

Smith, the widely acknowledged “mile master” of the American Flat Track series because of his skill on high speed big race tracks, launched his championship run with his win in Phoenix last year, the first of his four victories to claim the title by a mere five points over four-time champion Jared Mees, also claiming Michigan as home.

That intense competition between Smith and Mees has carried over into 2017 as the pair have dominated the season’s first three races. Although the title fight is a bit of deja vu, the new year has a new twist as the pair are on the same machinery and account for two of the three riders on the formidable Indian Wrecking Crew, which also marks Indian Motorcycle’s return to flat track racing after more than a fifty-year absence.

Smith is coming to Phoenix with momentum after winning in Charlotte, but Mees, who won the first two rounds in Daytona and Atlanta leads Smith in the championship tally by a mere eight points. “I want it bad,” said Mees about what would be his fifth national title. “Bryan’s riding extremely well right now so it won’t be easy.”

The new Indian Scout FTR 750 is powered by an all-new race-only V-Twin designed exclusively for flat track racing. The new Indian formally made its debut late in 2016, with veteran Joe Kopp at the helm. Kopp had an impressive debut on the FTR750 with a seventh-place finish and a win in the Dash for Cash race. But what was more impressive was who would be the third member of the Indian Wrecking Crew, and Smith’s teammate---Brad Baker’s---dominant season finale race win at Santa Rosa.

Not to be outdone, Harley-Davidson unveiled an all-star team of riders---and a new bike----to respond to the challenge. The team is led by three-time Grand National Champion Kenny Coolbeth, Jr. of Connecticut, and includes two-time title holder Jake Johnson and Brandon Robinson, both from Pennsylvania, who among them tally 59 Grand National race wins.

“With the fuel injection, the Harley-Davidson has a lot of potential and I think we have the bike to beat,” said Coolbeth.
The rider who may give the top riders a stiff challenge in 2017 is Ryan Wells, the 2016 champion in AFT Singles who is moving up in class aboard a Kawasaki 650 Ninja. “Last season I achieved a life-long dream of winning my first professional championship,” said Wells. “For 2017, I have moved up to the premier class of American Flat Track and I’m looking forward to the challenge.”

In addition to the premier twin-cylinder class, the American Flat Track Singles, which features the up and coming talent in the sport led by New York Rider Kolby Carlile, will also race on the Arizona Mile.

A full day of events is planned at Turf Paradise, including music, a historic bike show and an autograph session with the top flat track riders in America. Don’t miss Grand Marshal, Law Tigers’ owner, Ari Levenbaum, as he takes the first lap of the day! More info is available at http://www.arizonamile.com.