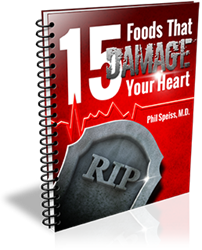 15 Foods That Damage Your Heart Report

Chronic inflammation is influenced by many factors. Your diet has the biggest influence on your health; this report details the best anti-inflammatory foods.

Chronic inflammation is a growing health issue in the United States. Contributing to heart disease, diabetes, obesity, mental decline and a host of other health issues. Many are surprised to learn inflammation often starts in the digestive system; specifically a result of an unhealthy diet.

Omega 3 is essential for improving health and reducing inflammation. Unfortunately, many people do not understand that Omega 6, often found in cooking oils is high in linoleic acid and actually contributes to chronic inflammation and health issues. The ideal ratio of Omega 6 to Omega 3 is 1:1, unfortunately, the average person eats a diet with a ratio of 20:1.

Processed foods, simple carbohydrates and sugar also contribute to inflammation in the body, primarily through rapidly increasing blood sugar levels, which increases insulin levels - which increases the inflammatory response throughout the body.

The article and video describe the very best anti-inflammatory diet foods to minimize the risk of chronic inflammation.

According to Michael Healey of BetterDigestion.org, “Chronic inflammation is influenced by many factors. Your diet has the biggest influence on your health; this report details the best anti-inflammatory foods.”

The complete Leading Causes of Inflammation and Digestive Health Issues article and video are available at http://betterdigestion.org/leading-causes-inflammation/.

An additional free 31-page report providing information about how to eat carbohydrates and avoid storing them as fat, titled 4 Tricks to Never Store Carbs as Fat, can be found at http://betterdigestion.org/never-store-carbs/.

About: BetterDigestion.org is a new website that was launched in March of 2013 in order to provide premier content for healthy digestion and overall health, specifically by controlling hormones and bacteria found naturally in the body. Recent topics have included Healthy Digestion for Women, Cheat Foods for Fat Loss, Good Bacteria for Food, Hormones for Weight Control, Fat Blasting Foods, Digestive Disorders: Probiotics for Gut Health, as well as several other highly informative articles to help people understand the connection between digestion and overall health. Most recently they released a video titled Probiotics for Fat Loss and Weight Burning.