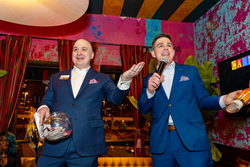 With a digital era that continues to transform literally every month, we realized long ago that virtual networking can reach even more people than in-person events can – people from every corner of the country can attend our well-prepared events.

In a time of uncertainty for so many businesses due to the pandemic hitting in-person, event-related businesses especially hard, veteran Chicago entrepreneurs Tony Paolella and Greg DeKalb have been working tirelessly developing multiple creative ways for their business to expand and thrive. Co-Founders of five-year-old Tony P’s Productions, Paolella and DeKalb have expanded their focus to virtual networking events, via “Tony P’s Virtual Networking Events,” which have become extremely popular with people from all over the country attending. It has allowed their business to flourish in a time where other businesses have struggled to find a foothold.

Even prior to the pandemic, Paolella and DeKalb realized the enormous potential benefits of turning their in-person networking events into a mix of both in-person and virtual events. The launch of virtual events, combined with the strong brand recognition they have already gained from their in-person events, allowed them to launch Tony P’s Virtual Events in four regions across the country-Chicago and Midwest, West Coast, Southwest, and Southeast.

“Virtual networking and virtual events were long in the works before the Covid-19 pandemic hit; Covid just sped up an idea that was going to happen anyway,” said Dekalb. “With a digital era that continues to transform literally every month, we realized long ago that virtual networking can reach even more people than in-person events can – people from every corner of the country can attend our well-prepared events without us having to have ‘boots on the ground.”

Over the last several years, Paolella and DeKalb have transformed Tony P.’s Networking Events from a small events business into one of Chicago’s leading event companies. Their first event in February 2017 had 250 in attendance, and those numbers grew from there. They now have over a dozen brand ambassadors and hundreds of sponsors around the U.S.

“Building a virtual network is much easier and less time-consuming than building a personal network, and virtual networking often leads up to a more successful in-person event to follow since people have already connected during the virtual events,” Paolella said.

Only a limited number of people can sign up for each virtual event, ensuring that everyone in the event has a chance to connect with the other participants, and meet in smaller breakout rooms to pitch themselves.

Tony P’s Productions, including Tony P’s Networking Events and Tony P’s Virtual Networking Events, are a subsidiary of Appointments IQ, also owned and founded by Paolella and DeKalb. Appointments IQ is a lead generation company that helps businesses build up their sales pipeline, significantly increase their prospects and leads, and substantially grow their ROI’s.