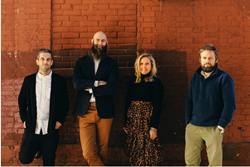 “As an independent company, we hear time and time again from our new clients that they are tired of being lost in the systems of the old agency models. As we scale our agency, we want and clients deserve laser focused leadership on the work," said Judith Carr-Rodriguez, Partner and CEO.

Since being founded in 2013, FIG has cemented its place as a leading creative agency in the US, creating outstanding work for brands like Zillow, Benjamin Moore, Waze, and Ketel One Vodka, and winning accolades for its culture, business growth and innovation. FIG continues to see an impressive increase in growth amidst the pandemic and takes pride in its independent agency status, which allows them to make the right decisions for their clients and people at all times.

With that in mind, FIG has been purposeful about scaling with excellence at the forefront, and has embraced a new model to achieve that. Joining the founding partners (Mark Figliulo, Judith Carr-Rodriguez, Robert Valdes and Richard Tan), King, Stallings, and Jimenez will lead all clients, build exceptional teams and create distinctive work. Further cementing FIG’s position as Storytellers for the Information Age, Frederick Stallings will also lead the Story Data™ practice at FIG, the data system that underpins FIG’s storytelling process.

The four original partners will lead all innovation initiatives, culture, talent attraction, development and management, and business operations, and Mark & Judith will remain hands-on with clients and new business, both of which are their passions. Based on the track record of the last 7 years, FIG believes that the combination of business focused owners and work focused owners will be a magic formula in more effectively answering the needs of clients who are increasingly getting tired of the old agency systems putting politics above storytelling excellence.

“We couldn’t be more excited to welcome Kristen, Rick, and Ramon as new Partners at FIG, and to position them alongside Scott who is one of the best creatives in the business,” said Judith Carr-Rodriguez, Partner and CEO. “As an independent company, we hear time and time again from our new clients that they are tired of being lost in the systems of the old agency models. As we scale our agency, we want and clients deserve laser focused leadership on the work. Our mission is to raise the bar for modern storytelling and we believe that the combination of Scott, Kristen, Ramon and Rick are an unmatched team in the industry. We are lucky to have them.”

Please see below for bios of FIG’s new Partners, as well as Scott Vitrone and the 4 founding partners of FIG, Mark Figliulo, Judith Carr-Rodriguez, Robert Valdes and Richard Tan.

About FIG:
FIG are Storytellers for the Information Age. We exist for growth-focused CMOs who share our belief that stories scale brands, and want to harness the outsize effectiveness of jaw dropping creativity.

The integrated media & creative agency has been recognised by Inc Magazine and AdAge as one of the best places to work in the US, by Inc Magazine in 2019 and again in 2020 as one of the fastest growing privately held companies in America, and is on the Adweek 100 list as well as the AdAge Agency A List for the last 3 years. FIG was named on LinkedIn's 2020 Top Startups List, which ranks the 50 U.S. companies that have stood out this year, attracting investment, employees and attention, and included breakthrough brands like Masterclass, Brooklinen and Robinhood. In January 2021, FIG was shortlisted for Campaign’s Independent Agency of the Year. Based in NYC, FIG is, of course, 100% independent.

Scott joined FIG as a partner in 2017. His first ever “professional” ad won a Gold Lion at the Cannes International Advertising Festival, he’s gone on to win that award along with every other industry award multiple times. Scott led the creation of the iconic “Whatever's Comfortable” campaign for Southern Comfort. And in 2007, after writing the Skittles campaign, a campaign that's still running today, he was the most awarded creative in the world. During his career at shops like W+K and Barton F. Graf, he's won an Emmy and has helped shape work for Nike, ESPN, Delta Air Lines, CNN, Heineken, Target, Virgin Atlantic, Land Rover, Miller Brewing Company, Sprint and FedEx.

Kristen joined FIG in 2018 and is now responsible for setting the operational and strategic vision for FIG’s client engagements. Kristen is a dynamic and inspiring leader who has spent her career serving as a trusted advisor to some of the world’s most loved brands. A sharp strategic thinker known for her keen creative instincts, prior to FIG, Kristen was the Managing Director of Engine Agency New York (formerly Deep Focus). She has led the development of effective and award-winning campaigns for brands like L’Oreal, DirecTV, HBO, Frito-Lay, and Comcast throughout her career.

Rick joins the FIG team as Partner for Media & Data systems after five years leading the data and analytics team at Ph.D., latterly as Chief Data Officer. Rick has extensive digital innovation experience, spearheading the mainstream adoption of programmatic driven marketing and leading marketing science. With technology transforming the way consumers interact with brands, he fosters data adoption within the industry. Rick aims to deepen the relationships with brands who want to engage with consumers. He strives to harness the power of data to make creative stories even more distinctive and compelling.

A firm believer that a brand is shaped by the sum of all consumer touch-points, Ramon's strategic thinking has informed business innovation, integrated campaigns, IP development and experience design for clients including Google, Nike, Samsung, LVMH, JPMorgan Chase, Coca-Cola, Vodafone and J&J among many others. During his international journey to FIG, Ramon worked at leading marketing and media companies such as Droga5, Viacom, R/GA, JWT and Vice. His work has been recognized by effectiveness and creative award shows around the world.

Mark has advised some of the world’s most successful brands for over 25 years. His vision for a new type of agency coupled with experience gained leading agencies like TBWA has led to the resounding success that is FIG, Storytellers for the Information Age. Mark has been named in Ad Age’s Top Ten and has been nominated for an Emmy four times. Mark has won over 30 Lions and every other award, in every color and in every category. Mark focuses on the vision for FIG, striving every day to reinvent what an agency can be through talent density and storytelling data systems.

Judith is a digital native, passionate about helping brands transform for today’s data-driven, experiential and technology-enabled world. As President of LBi, she led the agency’s growth from boutique agency into the world’s largest independent digital agency and subsequent acquisition by Publicis Groupe. As CEO of FIG, Judith has commercial and operational responsibility for the agency and all its disciplines. She spends the majority of her time with clients and ensuring FIG scales in line with the agency’s ambitions.

Robert has served as Head of Production at TBWA\Chiat Day\NY, Executive Producer at Crispin Porter + Bogusky, and Head of Interactive Production at Droga5. He is most proud of his role in the game-changing Domino’s Pizza Tracker, Burger King’s Whopper Sacrifice and the Sprint Framily work produced during FIG's first year. He has been a recipient of five Gold and one Silver Cannes Lions, a Grand CLIO, ANDY Gold and ADC Gold among other industry awards. In 2019 Robert became FIG's Chief Operating Officer bringing his unique breadth of problem solving and systems thinking to bear across the entire agency.

A qualified Chartered Accountant (CPA equivalent), Richard is experienced in all aspects of finance, including the sale of performance marketing company Big Mouth Media to LBi. In NYC, he oversaw the acquisition and merger of MRY as well as the transition into the Publicis Groupe. Richard excels in creating mutually beneficial working relationships with FIG’s clients and partners ensuring that we can seamlessly and expertly deliver our work in line with our agency value of truth.