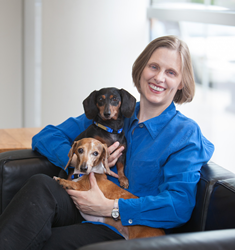 We at Best Friends knew of Huss’ accomplishments prior to the Bad Newz Kennels case, but we learned her true heart through her work advocating for those dogs and her success in helping to prove that dogs rescued from dog fighting did deserve a chance at life.

Huss gained national prominence in 2007 when she was appointed by the District Court of the Eastern District of Virginia as the guardian/special master of the dogs seized during the Bad Newz Kennels dogfighting case.

“We at Best Friends knew of Huss’ accomplishments prior to the Bad Newz Kennels case, but we learned her true heart through her work advocating for those dogs and her success in helping to prove that dogs rescued from dog fighting did deserve a chance at life,” said Julie Castle, CEO, Best Friends Animal Society. “It has become commonplace now for dogs seized from these situations to be assessed and rehabilitated, so it is easy to forget that prior to this case dogs like these were summarily killed. Huss was instrumental in this groundbreaking precedent.”

Huss will come on board in July 2019. She will play a key role in advising management and the Board of Directors on all legal matters, work with management to ensure Best Friends has policies and practices that will protect the organization’s assets and reputation, while also supporting the success of Best Friends programs.

Her focus in research and writing is on the changing nature of the relationship between humans and their companion animals and whether the law adequately reflects the importance of that relationship as well as analyzing issues relating to service and assistance animals. Huss has also taught at the University of Iowa College of Law, Notre Dame Law School, Stetson University College of Law and Lewis & Clark Law School. In addition to Animal Law, Professor Huss teaches Non Profit Organizations, Professional Responsibility, Business Associations and other business law courses.

About Best Friends Animal Society
Best Friends Animal Society is a leading national animal welfare organization dedicated to ending the killing of dogs and cats in America's shelters. In addition to running lifesaving programs in partnership with more than 2,500 animal welfare groups across the country, Best Friends has regional centers in New York City, Los Angeles, Atlanta and Salt Lake City, and operates the nation's largest no-kill sanctuary for companion animals. Founded in 1984, Best Friends is a pioneer in the no-kill movement and has helped reduce the number of animals killed in shelters nationwide from 17 million per year to about 800,000. That means there are still nearly 2,200 dogs and cats killed every day in shelters, just because they don’t have safe places to call home. We are determined to bring the country to no-kill by the year 2025. Working collaboratively with shelters, rescue groups, other organizations and you, we will end the killing and Save Them All. For more information, visit bestfriends.org.