The historic Tabor Opera House in Leadville is the only site in Colorado—and one of only 20 nationwide—selected for the 2018 Partners in Preservation: Main Streets national historic preservation awareness campaign and the chance to win $150,000 toward rehabilitating a national icon. The Tabor also received a $500,000 Save America’s Treasures grant. 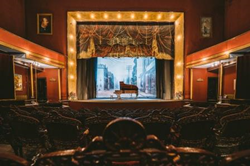 Inside the Historic Tabor Opera House

"We are thrilled that this preservation competition will bring awareness to Leadville’s historic district . . ." -- Stephanie Spong, TOHPF Board President

The historic Tabor Opera House in Leadville is the only site in Colorado—and one of only 20 nationwide—selected for the 2018 Partners in Preservation: Main Streets national historic preservation awareness campaign and the chance to win $150,000 toward rehabilitating a national icon.

American Express and the National Trust for Historic Preservation (NTHP) created the campaign to increase the public’s awareness of the importance of historic preservation in the United States. Winners will be determined by popular vote from Sept. 24 to Oct. 26, 2018. Members of the public, regardless of where they live, can vote online each day at voteyourmainstreet.org/leadville.

Leadville Literary League founder and author Laurel McHargue is one of many ambassadors for the month-long voting campaign. "The support this campaign has mustered in our community is phenomenal, and we're hoping to encourage history lovers from around the world to join us in voting to fund the ongoing preservation efforts of this beautiful opera house," said McHargue.

The Leadville Main Street Program, the City of Leadville and the Tabor Opera House Preservation Foundation (TOHPF) are partnering to participate in the campaign. TOHPF Board President Stephanie Spong states, “We are thrilled that this preservation competition will bring awareness to Leadville’s historic district and, if we win, the funds earned will help us preserve the facade of the Tabor Opera House for generations to come.”

An important part of Leadville’s National Historic Landmark District, the Tabor Opera House is on the Colorado Preservation Inc’s “Most Endangered Places” list and the NTHP’s “National Treasures” list. Beloved locally, the opera house has been continuously in use as a community events center since it was built in 1879. Under imminent threat of demolition through neglect, the opera house is in a race against time and entropy as deferred maintenance, weather, crumbling bricks, water, and fire risk threaten this long-neglected historic treasure.

The Partners in Preservation grant, if awarded, will go toward the first construction phase of the Tabor Opera House’s $8 to $10 million rehabilitation project. This $1.5 million Phase 1 addresses the west and south facades to secure the building’s exterior.

The City and the Foundation have also announced a $500,000 award from the National Park Services’ Save America’s Treasures Historic Preservation Fund competitive grant program. This award likewise will go toward the $1.5 million Phase 1 project.

About Partners in Preservation:
The Partners in Preservation (PIP) program is a national partnership led by The National Trust for Historic Preservation, Main Street America and American Express working together to bring $2 million in preservation funding to projects on America’s Main Streets. PIP facilitates a public participation process to raise awareness of the work being done across the country to revitalize Main Streets and neighborhood districts in small towns, mid-sized cities, and urban centers across America.

About the Leadville Main Street Program:
Leadville has been a Colorado Main Street community since January 2015 and is committed to historic preservation downtown. We are excited to participate in the Partners In Preservation: Main Streets campaign.

About Save the Tabor:
The Save the Tabor effort has been at the forefront of historic preservation in the state of Colorado since the City of Leadville purchased the building in late 2016 from private ownership.