Have you ever wondered what it was like growing up on a farm in the time of the pioneers, surrounded by the beauty of God’s creation and wrapped protectively in the blanket of His love? In her new book, Martha Templeton describes to readers what it was like to live a blessed life through the innocent eyes of two young boys and their loving family. 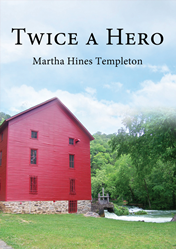 Small saplings would some day rise to replace the majestic pines, snapped off like match sticks by the tornado. So, too, would Ben rise above his fears and grow stronger, tested by his heroic actions when he saved Becky from drowning, and when he rescued Grandma in the tornado.

A new publication from Elm Hill, "Twice a Hero" by Martha Templeton tells the tale of a simple, happy family living in the New World as well as provides a glimpse into the culture of the pioneers. The book shows readers the close bond between Ben and Ray, two brothers who have the adventures of their lives. After noticing mysterious footprints appearing and thefts happening around their household, they investigate and try to catch the perpetrator without informing their parents while learning more about what the world around them has to offer.

“On the way home, Ben considered the conversation about Roscoe. Maybe the kids should try to be nicer to Roscoe,” the author shares with the readers that some children might not be as happy as Ben, Ray, and Becky share. “One thing was bothering Ben, though. He had noticed a hole in Roscoe’s shoe sole that looked like it matched the footprints he and Ray had been finding. Could Roscoe be the thief? But why would he want to steal their food? They hadn’t done anything to him.”

In the span of a year, Ben faces different kinds of dangers, most of which are the result of his curious nature. Ray becomes protective of his younger brother, but the latter feels that he is old enough at age ten to be given more responsibility and respect. In “Small saplings would some day rise to replace the majestic pines, snapped off like match sticks by the tornado,” the author kickstarts Ben’s continuous growth as he performs heroic acts when his faith and spirit are tested. “So, too, would Ben rise above his fears and grow stronger, tested by his heroic actions when he saved Becky from drowning, and when he rescued Grandma in the tornado.”

Author Martha Templeton is descended from pioneers who resided in Shannon Co, Missouri for six generations after moving from Kentucky and Virginia in the early 1800s. She uses her book as a looking glass into the lives of her ancestors, which shows the simplicity present in the old days. She urges readers to see the beauty that our ancestors beheld during their time. While technology back then was very limited compared to what we have in this digital age, families were just as happy—if not more. This is because they treated every moment as an opportunity to grow closer.