To Celebrate International Left-Handers' Day on August 13, Lefty's the Left Hand Store is Giving Away Hats and Prizes at Their Flagship Store on Pier 39

To celebrate International Left-Handers' Day on August 13, Lefty's the Left Hand Store is giving away hats and prizes at their flagship store on Pier 39. 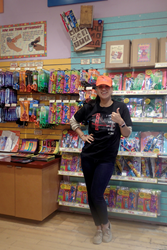 Lefty with hat in Lefty's store on Pier 39

I May be Left-Handed but I'm Always Right!

To celebrate International Left-Handers' Day on August 13, Lefty's the Left Hand Store is giving away hats and prizes at their flagship store on Pier 39. Free Left-Handers' Day hats are now available on the website and in the store. Lefty's is also holding a contest on their Facebook page for the best ideas for how to spend Left-Handers Day (getting back at right-handers).

Left-handers suffer more or less in silence for 364 days a year, but on this one day, they tell it like it is. The world is designed for right-handers. Everyday objects from door knobs to school desks to can openers are specifically engineered to work well for right-handers, and to frustrate lefties. Door knobs turn clockwise rather than counter-clockwise, a lefty's natural motion. The same can be said for can openers - lefties often cut themselves struggling to master the simplest can opener. School desks almost all have the writing area on the right side. There may be a few lefty desks in a classroom, but never enough of them.

Scissors are the biggest problems for most lefties. There are lots of scissors which claim to be ambidextrous, but that is just not possible because the blades have to be assembled the opposite way from right-handed scissors, with the left blade on top. This requires engineering, and retooling in the factory. Lefty scissors are very hard to find because producing them is expensive, and there just aren't enough lefties to support a large industry.

Because it's hard to find left-handed tools and important supplies (like notebooks with the spirals on the right - much easier for lefties to use), Lefty's the Left Hand Store produces their own. Lefty's works with fabricators from the United States and around the world to produce left-handed essentials, from measuring cups and scissors to corkscrews, can openers, ecoleather portfolios, and spiral notebooks. A big favorite is the dribble mug, which drips liquid onto the person who holds it in their right hand!. These products can be affordable because Lefty's is simply the best source, and thousands of left-handers rely on their products.

For Left-Handers' Day 2017, Lefty's has printed up hats that say "International Left-Handers' Day", and there will be games and prizes at the Pier 39 store all day long. Visit Lefty's retail stores on Pier 39 in San Francisco and in Downtown Disney at Walt Disney World Resorts in Orlando.