The Herb Alpert Foundation which funds the Herb Alpert Award in the Arts will double the number of annual award recipients from 5 to 10 while maintaining the $75,000 unrestricted prize given to each winner in the five categories of dance, music, film/video, theatre and visual arts. The Foundation also adds immediate COVID-19 related support to artists in need and increases/accelerates grants to existing grantees. 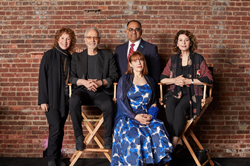 If doctors, nurses, and firefighters are our first responders then artists, society's truth tellers, are our second responders. How can we as a society not do everything – more than we think - to support them in this crisis?

Legendary trumpeter and philanthropist Herb Alpert has announced that the 27th annual Herb Alpert Award in the Arts (HAAIA) will be presented to ten artists, doubling the number of awardees from past years. The award includes an unrestricted prize of $75,000 for winners in each of five categories: dance, film/video, music, theatre and visual arts.

Herb Alpert, speaking to the financial crisis many artists are facing said, "If doctors, nurses, and firefighters are our first responders then artists, society's truth tellers, are our second responders. How can we as a society not do everything – more than we think - to support them in this crisis?”

The Herb Alpert Award in the Arts (HAAIA) was conceived by Herb Alpert and his two-time Grammy-winning vocalist wife Lani Hall Alpert to reward creative experimenters who are challenging and transforming art, their respective disciplines, and society. In addition, the awards provide vital financial support to each artist at a key juncture in their creative development. Past winners include: Suzan-Lori Parks, Catherine Opie, Carrie Mae Weems, Vijay Iyer, Taylor Mac, Tania Bruguera, Okwui Okpokwasili, Derek Bermel and Michelle Dorrance.

On this year’s major change to the awards, Lani Hall Alpert said, "Giving the award to five talented artists every year for the past 26 years has been incredibly gratifying. But the effect of the pandemic on the arts made us realize that we needed to do more. That’s why we've doubled the number of awardees for next year.”

The HAAIA has been overseen since its inception by founding director Irene Borger, who has watched the impact the award has had on the 130 recipients so far. Irene noted, “If a prize to an individual artist is doing its work, the benefits can inspire, shake up, irritate, move, and move others to action. May the impact of the ten artists be exponential.”

In addition to the $75,000 unrestricted prize, awardees are given a week-long artists residency at CalArts (California Institute of the Arts) which has administered the prize for 26 years. CalArts president Ravi Rajan added, "We all know why Herb and Lani didn't hesitate one bit to do this -- because they too are artists, and they see how artists will model that better future for us all."

In 1985 Herb Alpert and Lani Hall Alpert established the Herb Alpert Foundation to oversee their philanthropic efforts focused on the arts and compassion and well-being. Since then, hundreds of organizations have been positively impacted by the Foundation’s funding and support.

Rona Sebastian, president of the Herb Alpert Foundation, talking about the dynamic couple whose passion started it all, said, "Support to artists, whose voices are the heart and soul of our democracy, has always been important to Herb and Lani. It led them to start the Herb Alpert Award 26 years ago when the National Endowment for the Arts funding to artists was eliminated. And now, under incredibly difficult times, the desire to increase their support to individual artists is central to their philanthropic work."

Adapting strategies to the current crisis has been a priority for the Foundation. The first order was to commit continuing support to the existing pool of grantees, while also seeking opportunities to provide immediate relief to individuals in crisis. To do so the Foundation identified several organizations that could provide specific COVID – 19 emergency support and added additional funding for those objectives to existing 2020 commitments. These included six figure grants of additional COVID-19 relief / support to Chrysalis, the Jazz Foundation, the Good People Fund, and Artists Relief. Another priority was to expedite 2020 grant payments to grantees for which cash flow issues were pressing.

Rona Sebastian added, “In general, we see our funding addressing two levels of need simultaneously……direct emergency support as well as funding for ensuring longer term sustainability of our grantees as we continue to weather this terrible crisis situation.”

About The Herb Alpert Foundation
The Herb Alpert Foundation envisions a world in which all young people are blessed with opportunities that allow them to reach their potential and lead productive and fulfilling lives. Over the past few years, the Foundation has focused on core areas, such as “The Arts,” a broad category that includes arts education, a focus on jazz, and support to professionals. This also includes programs that seek to use the arts to help meet the needs of underserved youth and to help build competencies that will enable them to become successful adults. The other core area is “Compassion and Well-Being,” which celebrates the positive aspects of human psychology and seeks to bring more empathy and compassionate behavior into our society. Please note: the Foundation does not accept unsolicited proposals.