Classic Franchise from Arc System Works to be released on the iiRcade Platform at Launch. 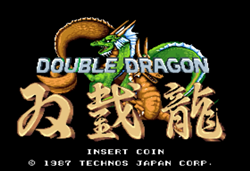 Having played Double Dragon as a child, this is an exciting announcement for myself and the iiRcade team

iiRcade Inc., the ultimate home arcade platform provider that allows gamers of all ages to own and play their favorite retro and modern arcade games at home, is pleased to announce that the Double Dragon series, initially developed by Technōs Japan and officially licensed by Arc System Works, will be added to iiRcade’s game library.

This is the first home arcade experience of the original Double Dragon series for gamers to play with an arcade controller, such as joysticks and buttons, which was only available at the game center or arcade center in the past.

Originally release as an arcade title in Japan in 1987, Double Dragon is considered to be one of the first successful game of the genre, resulting in the creation of several spinoffs, as well as inspiring other companies in creating their own beat ‘em ups. The series follows martial arts brothers Billy and Jimmy Lee as they battle various rivals and street gangs.

“Having played Double Dragon as a child, this is an exciting announcement for myself and the iiRcade team,” said Jong Shin, founder & CEO of iiRcade. “We’re very grateful to bring the officially licensed classic ‘beat ‘em up’ series to the home arcade.”

For more information and to keep up with product announcements, visit iiRcade.com.