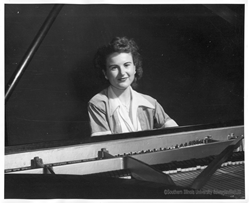 She demonstrated sublime artistry in each performance and taught us to pursue excellence at every opportunity.

SIUE will receive two sets of the Slenczynska recordings with one set to be added to the Ruth Slenczynska Collection at Lovejoy Library, and the other to circulate to the public once cataloged.

Cyrus Meher-Homji indicated that the CD set will soon be available to buy from Amazon, or to download or stream via I-Tunes, Pandora, and Spotify.

The 95-year-old Slenczynska last appeared at SIUE on Jan. 9, 2018 when she performed brilliantly before a crowd of 350 in sold-out Dunham Hall. The next afternoon, she instructed eight students in master’s classes with an attentive audience of approximately 100 on the SIUE campus.

SIUE Chancellor Randy Pembrook studied with Slenczynska while pursuing bachelor’s and master’s degrees at SIUE in the 1970s. “I feel so fortunate to have studied with her,” Pembrook said. “She demonstrated sublime artistry in each performance and taught us to pursue excellence at every opportunity.”

Slenczynska is one of five women, between the ages of 94-110, who are featured in the 2019 documentary, Can't Stop the Sun From Shining, produced by Dr. Teresa Mular. The film highlights the strong spirit and zest for life shared by these women, and also features Slenczynska’s piano performances throughout the film. An archival copy is expected soon.
The Pacific Musical Society in San Francisco recently created the video “Living Legends: Ruth Slenczynska” to honor Slenczynska’s legendary career. She has performed for five and met six U.S. Presidents, beginning with Herbert Hoover in 1930, including playing a Mozart four-hands piano duet with President Harry S. Truman in the White House. She also met former First Lady Michelle Obama and her daughters.

Dickman indicated that the pandemic hasn’t diminished Slenczynska’s desire to contribute musically. “Her Beethoven sonata performances, prepared to celebrate the 250th anniversary of Beethoven’s birth, were videorecorded this spring in California in the home of a former student with whom she was visiting when the COVID-19 pandemic prevented her from travelling to Japan to perform,” Dickman said. “So, Slenczynska recorded videos of the sonatas—including Beethoven’s popular “Pastoral,” Op. 28 and “Moonlight,” Op. 27, No. 2 sonatas—there in California and shared them via YouTube!”

Since the California fires intensified, the Sacramento native has been visiting another former student, a piano professor in Pennsylvania.

Slenczynska gave her first piano recital at age four; she studied with Josef Hofmann at the Curtis Institute of Music the next year. Shortly thereafter in Europe, she studied piano with Artur Schnabel, Egon Petri, Alfred Cortot, and Sergei Rachmaninoff, and composition with Madame Nadia Boulanger.

Slenczynska made her debut in Berlin at age six and in Paris at age seven. She became an instant musical sensation, heralded as one of the greatest child prodigies since Mozart.

Slenczynska’s SIUE connection was established in 1964 when she accepted a full-time position as artist-in-residence, a title she retained until 1988. She married James Kerr, PhD, an SIUE political science professor in 1967.

Slenczynska’s life changed dramatically with the death of her beloved husband in 2001. After completing her remaining SIUE part-time teaching assignments, she accepted an artist-in-residence teaching position at Soochow University in Taipei, Taiwan for the 2002-2003 academic year. While in Taipei, she was invited to perform in Japan, a first for the 78-year-old pianist. This led to subsequent trips to Japan and a highly acclaimed series of 11 CD recordings, entitled “The Art of Ruth Slenczynska,” under the Liu MAER label. These featured Brahms’ complete piano character pieces, Chopin’s scherzi, ballades, études, and preludes, and sonatas by Mozart, Beethoven and Chopin.
For more information about Ruth Slenczynska, visit siue.edu/lovejoy-library/special_collections.

The SIUE Library and Information Services (LIS) consistently strives for new and inventive ways to deliver information to students, faculty and the community. LIS is home to Lovejoy Library, the heart of the University. The library provides SIUE faculty and students the information required for their academic pursuits that result in improving our communities. LIS faculty and staff nurture SIUE students’ scholarship with resources that support the collaboration and innovative thinking needed to succeed in the global marketplace.