Highway Troubadour will be released on November 27 via BMG, and is available now for pre-order 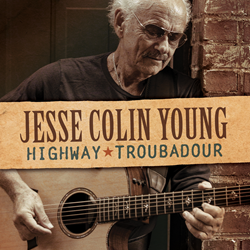 “Highway Troubadour is not only a return to my roots, but the beginning of a surprise adventure of solo performing,” said Young. “I have begun to take guitar playing to a whole new level while revisiting my decades of musical catalogue."

One of the most influential and enduring singer-songwriters, Jesse Colin Young, who first made history with the Youngbloods on their classic ‘60s peace anthem “Get Together,” and who has amassed a loyal worldwide following over the past five decades, will release his 20th solo album, Highway Troubadour, on November 27 via BMG.

When COVID-19 ground the world to a halt in 2020, Young launched a new series called "One Song at a Time" — a series of videos that found him performing songs from across his entire career, while accompanying himself on acoustic guitar. The series became a success on platforms like YouTube and Facebook, and earned him an "In My Room" session with Rolling Stone, as well as a featured performance on CNN's "The Fourth in America" alongside students from Little Kids Rock. Collectively, the resulting success led Jesse to go back into the studio and record his newest album, Highway Troubadour.

Recorded with just two AEA A440 ribbon microphones to capture warmth – one for his voice, and one for his guitar – Highway Troubadour features newly-recorded solo performances of songs from Jesse Colin Young’s entire catalog, including a revised take on the Youngbloods’ “Sugar Babe” and an intimate version of “Cast a Stone” from his critically-acclaimed 2019 release, Dreamers.

“Highway Troubadour is not only a return to my roots, but the beginning of a surprise adventure of solo performing,” said Young. “I have begun to take guitar playing to a whole new level while revisiting my decades of musical catalogue.”

Highway Troubadour is available for pre-order with “Cast A Stone” available as an instant grat track and accompanying single. In support of the new single, Young has released a new music video which can be viewed here.

Earlier this year, Young launched a new video and audio podcast titled Tripping On My Roots. Featuring interviews, musical performances, rare collaborations, and plenty of storytelling, Tripping On My Roots is equal parts documentary, autobiography, and a first-hand look not only into the creative influences of a folk icon, but into an entire country’s musical history, too. Fittingly, the project’s theme song is serving as the first track of Highway Troubadour.

Throughout the remaining 10 songs, Highway Troubadour highlights some of Jesse Colin Young’s most beloved classics including selections from the Youngbloods’ albums The Youngbloods (1967), Earth Music (1967), and Elephant Mountain (1969), alongside a number of tracks from his releases as a solo artist including The Soul of a City Boy (1964), Song for Juli (1973), Light Shine (1974), Songbird (1975), and Dreamers (2019).

A longtime tradition of folksingers is to create music that responds to the modern era, serving as a sort of public record. Jesse Colin Young has routinely taken that lesson to heart, delivering stirring performances throughout the decades — from "Get Together" to 1978's "American Dreams Suite" to 2019's "Cast a Stone" — that shine a light not only on his musical skills, but also on the political, social, and environmental issues of the time.

For Jesse, that approach comes from a lifetime of travel, immersing himself in different cultures, witnessing life from multiple angles, and making art that's just as multi-faceted. He's been encouraging the world to "get together" for decades, with his own music serving as the soundtrack.

Highway Troubadour was produced by Jesse Colin Young and his wife Connie Young, and will be released on multiple formats, including iTunes, Amazon, Google Play and Spotify.

ABOUT JESSE COLIN YOUNG:
A pioneer of American roots music for more than half a century, Jesse Colin Young has left a unique mark on the intersecting worlds of folk, blues, jazz, country, and rock & roll. As the front man of the Youngbloods, he immortalized the ideals of the Woodstock generation with "Get Together," an international hit that called for peace and brotherhood during the turbulent 1960s. During the decades that followed, Young expanded both his audience and his artistic range, releasing a string of solo albums that mixed socially conscious lyrics with top-tier guitar skills and gorgeous vocals. An acclaimed songwriter, singer, instrumentalist, producer, label owner, podcast host, and longtime social/environmental activist, he has established a permanent place in America's musical landscape, while continuing to make modern music that's every bit as vital as his work during the countercultural era.