The Grammy and Oscar-nominated star will release his autobiography, “On and Off” on May 2, 2022. 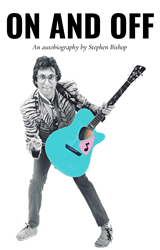 Stephen Bishop: On and Off (Autobiography)

"In my life I will lose good friends, girlfriends, and faith in some people, but I will always have my songs." Stephen Bishop

Five decades into his incredible career, multi-platinum-selling singer-songwriter Stephen Bishop, whose timeless hits include “On and On,” “Save it for a Rainy Day” and “Everybody Needs Love,” and who wrote the Oscar-nominated song “Separate Lives,” is releasing his long-awaited autobiography.

This autobiography follows his journey from childhood to the present. He talks about his hardships, success and whacky experiences. He started this project three years ago in tandem with a documentary film that will be released soon.

Bishop says, “This book is wild and crazy, like the life I’ve led. I want fans to know the real Stephen Bishop story. My beginnings, childhood, moving to Los Angeles, navigating the music business, working with legendary artists, and my songs. In my lifetime I’ve written something like 650 songs. I delve into the world of songwriting, share my rough drafts and how I wrote some of my most famous songs. I narrate the audiobook as well, and trust me, you will be laughing, crying and on the edge of your seat.”

Bishop says that this book, On and Off, contains “stories that no one has heard before. Stories about his famous friends that everyone knows and loves. Stories of friendship, hardships, successes and laughs.” The book originally started as a side project. After touring was cancelled due to the pandemic, he started working on this project full time.

“There’s a little bit of everything, everyone, and a few stories that are unexpected. I am more than a balladeer and someone who writes broken-hearted love songs.”

A songwriter since the age of thirteen, Stephen left his home in San Diego for Los Angeles at seventeen. He got a job writing songs for a publishing company for fifty dollars a week. Years later, this veteran songwriter has had his songs recorded by Phil Collins, Barbra Streisand, Eric Clapton, Kenny Loggins, Beyonce, Art Garfunkel, Pavarotti, David Crosby, and many others.

Over the years, film fans have long treasured Bishop’s appearances in pictures such as Kentucky Fried Movie, The Blues Brothers, Twilight Zone: The Movie and, of course, his legendary cameo as the “Charming Guy with Guitar” in National Lampoon’s Animal House, which he did the theme to. In addition to “Separate Lives” from the movie White Nights, he’s contributed songs for other films, such as Tootsie, The China Syndrome, Roadie, Mickie & Maude and Unfaithfully Yours, among others.

In total Stephen has written 650+ songs, released 19 albums, has had his music streamed over 500+ million times, and sold over 15+ million records worldwide for himself and other songwriters.

"In my life I will lose good friends, girlfriends, and faith in some people, but I will always have my songs."
-Stephen Bishop

"Stephen Bishop is one of my all-time favorite singer-songwriters."

"As a writer of love songs, he is one of the finest in the world, but there is more in him than that. I am a certified 'Bish' fan."
-Phil Collins

"Stephen Bishop frequently lifts his songs to dreamy peaks. He possesses something that all of his singer/songwriter exemplars lack: a serenely nutty sense of humor."

"Stephen Bishop is one of pop's most graceful voices that extends into a fifth decade of a multi-faceted career marked by hit-making for everyone from Barbra to Beyonce and numerous popular solo recordings and classic soundtrack cuts."