Leigh Overton Boyd with Emily Adams and Lisa Overton’s newly released “The Fire She Set” is a memoir of arson, perseverance and redemption surrounding a 1974 house fire.

“The Fire She Set” from Christian Faith Publishing authors Leigh Overton Boyd with Emily Adams and Lisa Overton is a detailed account that narrates the devastating events and the investigations following an arson fire that happened in June 1974 in the Overton family home. 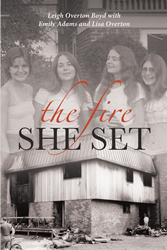 “The Fire She Set” tells the story of a family’s loss, the journey to find the truth and the powerful bond between sisters. “The Fire She Set” is the collaborative result by published authors Leigh Overton Boyd (her first book) with Emily Adams as ghostwriter; and Lisa Overton, author.
Leigh shares, “She believed her sister set fire to their home and killed their parents. The sisters grew up knowing they had secrets to keep. They did not talk about their mom’s extended absences or why their dad put Scotch tape on the backdoor frame. To cover up the chaos, they kept their clothes neat and got good grades. But when they were teenagers, an arson fire destroyed their home and killed their parents. Rumors were thick that summer that smart, angry, fourteen-year-old Lisa set the blaze. Then, adult powers they did not understand squelched the investigation. As teenagers accustomed to keeping silent, they packed up and moved on.
“Finally, with one son dead and her daughter away in college, Leigh, the oldest, decided it was time to find out if Lisa really did kill their parents, or if it wasn’t Lisa, who was it? She obtained copies of the police and fire investigations and began unwrapping the past. Specifically, a memoir containing elements of mystery and narrative, this book will engage you from the first page. It is the story of Leigh’s investigation as she tried to piece together the truth, but found more lies instead. With the help of her sisters, Leigh was able to reconstruct much of what happened to them in the beach towns around Atlantic City in the early 1970s. After the fire, one sister turned to heroin and another to alcohol; Leigh became Miss Atlantic City. Then, one by one, they each moved to California and shut the door on their past, even though they privately wondered whether one of them killed Frank and Nancy Overton. It’s funny. They never wondered whether one of their parents was trying to kill them.”
Published by Christian Faith Publishing, Leigh Overton Boyd’s new book is a profound story which details life of a family that deals with heartbreak, loss, and addiction after the fire that broke them apart. Through perseverance, Leigh’s journey strengthened the family bonds. This memoir also sheds some light on modern day fire forensics and investigations.
View a synopsis of “The Fire She Set” on YouTube.
Consumers can purchase“The Fire She Set” at traditional brick & mortar bookstores, or online at Amazon.com, Apple iTunes store, or Barnes and Noble.
For additional information or inquiries about “The Fire She Set,” contact the Christian Faith Publishing media department at 866-554-0919.