Leilani D. Mcleod’s newly released “Bloodline” is an intriguing tale of a marital dispute between two formidable persons that uncovers skeletons in the closet

“Bloodline” from Christian Faith Publishing author Leilani D. Mcleod is an electrifying story of two people whose failing marriage stirs a maelstrom of conspiracy and counterclaims. 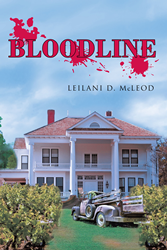 “Bloodline”: a riveting account of a criminal attorney and his alluring wife’s falling out in marriage that provoked a battle of principles and lawsuits. “Bloodline” is the creation of published author Leilani D. Mcleod, a retired woman entrepreneur, who decided to make Hawaii her permanent home.

Mcleod shares, “Ana Lord was one of the most intoxicating, infuriating, and most beautiful woman David had ever met. Ana made David want to live life again. Lately, being a criminal attorney, David had been feeling overwhelmed with work. David did not always play by the rules, and for this reason, he only worked with his personal team. He was a young, handsome, and ambitious attorney and would do anything for success. Now David found himself caught between Ana’s no-nonsense attitude and his own self. However, David forgot that Ana took her vows seriously; she not only believed in love but also believed in the vows of marriage. Ana found herself in the position of making her marriage work or divorce David. There was a catch now between the new attorneys David hired for his new offices, which would be a lot more work. So he did not make it home most nights. He delegated work to the attorneys, including divorce, litigation, debate, etc. In a dispute between Ana and David, two powerful people, a conspiracy was born, and it would change their lives forever.”

Witness how an established criminal attorney faces his wife in a tango of litigation and personal agenda that left them in utter vexation.

Consumers can purchase “Bloodline” at traditional brick-and-mortar bookstores or online at Amazon.com, Apple iTunes store, or Barnes and Noble.

For additional information or inquiries about “Bloodline,” contact the Christian Faith Publishing media department at 866-554-0919.